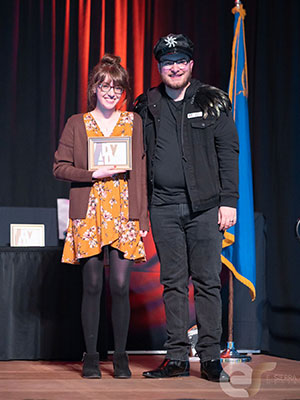 In a time when marketing and advertising generally conjures associations of robocalls and spam in your inbox, the American Advertising Awards (aka the ADDY)—an award sponsored by the American Advertising Federation—honors a kind of excellence that is often overlooked because it’s all around us. At its core, advertising is meant to be a combination of anthropology, psychology and sociology packaged in attractive design, clever language and—sometimes—video content that, in many ways, captures the creative spirit of a particular historical moment.

This year’s ADDY Awards event—with the theme “Diamonds in the Rough”—featured the work of local agencies and up-and-coming talent from Reno-area schools. While the AAF bestows awards across the entire advertising industry, it has also fostered a student division for enrolled full or part time college students who are not employed in the advertising industry.

Although TMCC students from the Graphic Communications Program have participated in the ADDYs for several years, 2019 marked a milestone: “[This year] found our students winning five Gold and eight Silver ADDY’s for work ranging from logo design and illustration to posters and collateral. The Graphic Arts & Media Technology program is proud of all of its student winners, the quality of their work reflects the high level of creativity and professionalism that the program strives for at all levels,” said Graphic Arts Professor Dan Bouweraerts.

TMCC student Kayla Pressburger, who was awarded two Gold and two Silver ADDYs this year, said the event itself was a positive experience. “The ceremony was exciting and inspirational. Everyone was extremely supportive of one another, and it was great to see a diverse range of amazing work from the industry,” she said.

TMCC Graphics and Design student Katelyn Brooke received three ADDY awards for work she has completed as a Graphic and Design student at TMCC. Brooke said that she was encouraged to join the AAF as a way to build her portfolio and to get her name “out there” to potential employers.  “The organization creates a winner’s book,” she explained, “that is available nationwide and online-- so people can look you up, and see your work.”

Brooke’s submission Starry Night received a Silver ADDY. The piece, which was based on Vincent Van Gogh's painting by the same name, utilized typed words to create texture for a piece intended to promote TMCC’s Fine Arts department. “I had to pick a department to promote through the play of expression versus simplicity,” said Brooke. The piece was somewhat of a departure for Brooke who self-describes her work as “edgy”—the swirl of colors and almost “chalky” appeal of the original painting made Van Gogh a natural choice.

“You just have to own [your style],” she said. “It’s OK to be different, just as long as you can be versatile to do other types of projects, too. In the end, you’re designing work for your client.”

Three TMCC students took home five Gold ADDY awards. TMCC student Melanie Zimmerman was recognized with two Gold ADDYs for her Illustration Kyl-O’s and for its accompanying Award Packaging. Erika Murray took home a Gold ADDY for her Adopting and Owning a Dog poster. Kayla Pressburger was awarded gold for her NISOD Poster and the TMCC Athletics Logo—a project that began with thumbnail sketches and a lot of research. “The TMCC Athletics logo was the most challenging [of my ADDY entries] because it needed to take a pre-existing, friendly-looking mascot and turn it into a sports logo that expresses vitality and energy,” she said. “To be honest, I almost gave up on creating that logo, but decided to push through my frustration and I’m really glad that I did.”

Pressburger, who decided to study graphic design because of her passion for art and design, said that TMCC’s program constantly challenged her in new ways while providing her opportunities to learn and grow as a graphic designer. “I would encourage students to enter their work into the ADDYs because it provides a great opportunity to get your work out there,” said Pressburger. “Also, my ‘cliche advice’ to new designers is to not give up. Over time, your work will improve as long as you work hard and remain open to growing as a designer.”