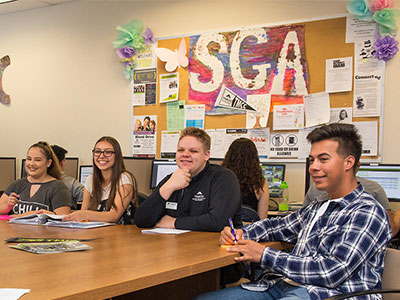 The SGA Meet and Greet on March 28 allows you to get to know the candidates for this year's SGA elections.

On Thursday, March 28 from Noon–1 p.m. clear your calendar for the Student Goverment Association (SGA) Meet and Greet that will be held in the Red Mountain Student Center. “This is a really great opportunity for people to interact with the candidates, and to ask them questions,” said Nicole Shimabuku, Coordinator of Student Life and Development.

What does Student Government Do?

According to current SGA Senator Grace Cooper, the way the Student Government Association functions was altered this past year. “We get to pick our hours and projects, whereas before the procedures for both were a little more strict.” Cooper focused her efforts on remodeling the SGA office to be ADA-friendly and has spearheaded an effort to receive more student feedback on vending machine foods.

According to SGA President Ahtziry Vasquez, the projects tackled by members of the SGA are far and wide—but all of them are undertaken with TMCC students in mind. Projects and initiatives from this past year include: recycling, adding more cultural events, LGBTQ Awareness, mental health, blood drives and tabling/helping with the SGA elections.

SGA Senator Ashley Maples has focused on increasing the interaction between student clubs and faculty and College administration. “I’ve even worked on increasing student membership,” she said, noting that 2018-2019 saw several new clubs appear on campus, including: the Latin Dance Club, Dungeon and Dragons Club and the Anthropology Club.

SGA Senator Hono Ozaki is developing an on-campus cultural festival in conjunction with the International Club in which students from various backgrounds can share similarities and differences using cultural artifacts like food, language and art. All SGA members agree: the experience builds your soft skills, enabling you to become a more effective communicator and leader.

Behind the scenes, SGA members meet with College faculty and administration to discuss various topics, offering their insight as the “student voice.” SGA members are assigned to specific committees (examples include: the Diversity Committee, Americans with Disabilities Act Committee, the Food Service Committee, Institutional Advisory Council Committee and the Technology Committee, to name a few.) Student Government, in other words, shapes the college experience not just for the SGA members themselves, but for everybody on TMCC’s campus.

Why You Should Care

If you can’t run for a position in the Student Government Association, but you want to have a say in your college education and how funds and programs are allocated on campus, the closest you can come is to cast your vote for your candidate(s) who can act as an advocate for you. And, what better way to find out who that advocate is than to meet them... and have some free cookies and coffee?

Not that cookies and coffee are truth-serums (although they are, certainly, delicious), sharing a meal—or a cup of coffee—with a person is a time-honored way of getting to know them.

Even though the voting period begins on March 25, please join in at the Meet and Greet on March 28. Casting your vote is a simple, quick way for you to make your college experience what you want it to be. Online voting begins March 25, and can be done by any computer. Ballots must be cast by April 15.

For more information about the Student Government Association, contact the department office at 775-673-7203.