TMCC Gives Back to the Community 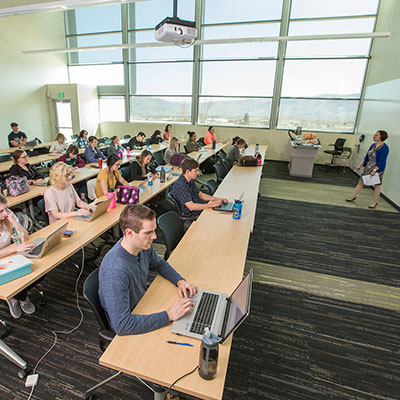 A recent study revealed that one in every 42 jobs in Washoe County is supported by the activities of TMCC and its students.

According to a study that examined data from 2016–2017, TMCC gives back to the community in a big way: we served 30,389 credit and non-credit students, supported 7,531 jobs in FY 2016-17 and the overall impact of our presence in the local business community amounted to $484.9 million in added income. This amount is equal to 2% of the GRP of Washoe County.

The study was conducted by EMSI, a provider of economic impact studies and labor market data, which investigated the economic impacts created by TMCC on the business community and the benefits that the college generates in return for the investments made by its key stakeholders: students, taxpayers and society.

The report revealed that the college plays a key role in helping its students increase their employability and achieve their individual potential. On average, a graduate with an associate’s degree from TMCC will see an increase in earnings of $8,600 each year compared to someone with a high school diploma or equivalent working in Nevada.

TMCC promotes economic growth in Washoe County in a variety of ways, most importantly by functioning as a primary source of education to Washoe County industries and a supplier of trained workers to industries in our community. This adds $67.5 million income to our local economy and creates 1,200 jobs. In fact, one in every 42 jobs in Washoe County is supported by the activities of TMCC and its students.

The study revealed that TMCC’s impact is felt across several local industries, most notably Health Care and Social Assistance, which generates an annual revenue of $110.7 million and 1,721 jobs due to TMCC’s presence in the community. Other industries, and our impact on them, are listed below:

Further, student spending benefits local businesses. For every dollar students invest in TMCC in the form of out-of-pocket expenses and foregone time and money, they receive a cumulative of $4.20 in higher future earnings. The average annual rate of return for students is 15.6%, while taxpayers see a comparable rate of return at 14.4%. This is impressive, given that the average return for a 30-year investment in the stock market is 10.1%.

Improving the Quality of Life in Washoe County

Education is correlated with a variety of lifestyle changes that generate taxpayer savings across three main categories: 1) health, 2) crime and 3) unemployment. Students make healthier choices than those who have never been college students, and are less dependent on national healthcare services associated with smoking, alcoholism, obesity, drug abuse and mental disorders. Students are also less likely to commit crimes, thereby reducing the demand for criminal justice services. Finally, students are more employable due to their increased knowledge and skills, lowering the demand for welfare and unemployment benefits.

All of these benefits associated with increased education will generate a present value of $16.3 million in savings to Nevada taxpayers.

The data and assumptions used in the EMSI study are based on several sources, including the FY 2016-2017 academic and financial reports from TMCC, industry and employment data from the U.S. Bureau of Labor Statistics and U.S. Census Bureau, and a variety of studies and surveys relating to education and social behavior. For more information on the report, Contact TMCC’s Office of Institutional Research at: 775-673-8239.