How Education Changed My Life 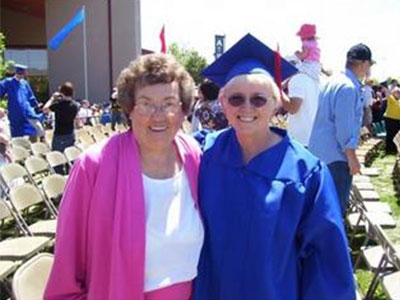 TMCC Alumna Patti Clarke at her graduation in May 2009.

TMCC Alumna Patti Clarke lived a lifelong dream and received her Associate Degree in General Studies. “I was brought up in foster homes and from the poor side of the tracks,” she said. “I thought a college education was for people who had money and were really smart. I didn't think I was smart and didn't think I could compete with other students.”

However, at 28 years old, she was ready to make positive changes in her life. She attended night school classes for two years to obtain her high school diploma. “I had let drugs and alcohol ruin my life. This was my journey to changing that.” After graduating, Clarke enrolled at TMCC. “The fact that I was going to college was something I never thought I would do,” she said.

It was 1983, and Clarke wanted to work toward an Associate Degree in Computer Science. First, she needed to complete three classes to secure employment at the Data Center for JCPenney, which she did, taking her first step in a positive direction. It wouldn’t be an easy journey, though. “I had a family, so I could only take one or two classes at a time,” Clarke said. “And I had financial constraints.”

Clarke, though, persevered, enrolling in as many classes as she could. She admits that she struggled in some of them, especially classes in which she was required to give oral presentations. These struggles eventually changed the focus of her major from Computer Science to General Education.

Then, in 1992, Clarke’s college dreams were put on hold. Her husband, Ray, passed away. A few years later, she lost another key supporter, her Uncle Larry. “He always encouraged me in school, even when I was in foster homes.” To say life was tough would be putting it mildly. Yet, Clarke turned these losses into reasons to hang onto her dream of graduating from college.

“Ray was proud of the fact that I turned my life around...to get my high school diploma. He could never tell me, but our friends would tell me. It meant the world to me. He was the one who made me finish the associate degree. I promised him I would. I decided to finish my AA for him, Uncle Larry and myself.”

In the Spring of 2009, Clarke earned her cap and gown for an associate degree in General Education. “The happiest day of my life was the day I graduated from Truckee Meadows Community College. It took me 28 years to get my associate degree. I figure it will take me till I am 95 to get my bachelor’s degree but I will get there,” she said.

Yet, it wasn’t just the degree itself. “In every class, I learned something useful. Math and History classes, you don’t think you don’t need all that, but I ended up using that information in careers, and that surprised me. Like algebra, thought I would never use that. Yet, even when I was running the Keno tickets—back before computers and you had to write the tickets—and one day, I just realized I was using algebra.”

Clarke she looks back on her college story and remarks that it continues to inspire her to try new things. “That old story about the train that could, that’s how it felt,” she said. “One step at a time...it made me feel like there was nothing I couldn’t accomplish.”

When asked if she had advice for students who might struggle due to the unexpected demands of college life, or for challenges in their personal lives, Clarke said: “you will never learn it all in life. The more you learn, the more you realize you don’t know. It’s just important to set your mind on a goal, and to work toward it. Education, especially, opens up your whole world.”

After a pause, she adds: “Your education is a gift to yourself. When you go beyond your limits, that, too, is a gift.”