Decades of Experience Adds up to Success 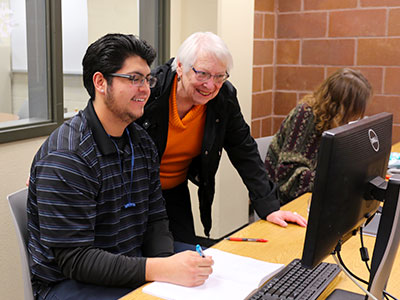 Math Skills Instructor Jeannine Lamar, who will celebrate her 90th birthday in April, inspires her students to succeed in math.

TMCC Math Skills Center Instructor Jeannine Lamar, who will celebrate her 90th birthday in April, grew up in a world many of us wouldn't recognize: where math and science classrooms were spaces that didn’t exactly welcome her. “In high school, I was the only girl who took math and science,” she said. “The boys...weren’t very nice about it, but that was the way it was.”

“I got my first job at Northrop as a calculator operator, producing analyses of many facets of building airplanes,” she said. When an opportunity presented itself to interview for a position at the RAND Corporation, Lamar took it even though she hadn’t earned her college degree yet.

“I spent 23 years as a researcher on mostly classified projects, writing reports and presenting papers at conferences and giving briefings at meetings at various locations, including the Pentagon,” she said.

During her time at RAND, Lamar completed her degree even though UCLA required students in their senior year to have full time status, a requirement Lamar couldn’t meet due to constraints that many students know all too well. “I had to work,” she said.

Traveling Around the World for Science

Once Lamar completed her degree, she changed careers and returned to Northrup where she worked as a programmer and technician. “That was a dream job,” said Lamar. “I had so much fun. I remember my boss telling me to be ready for his call to pack my bag and be ready to fly anywhere, anytime.”

The call, it turns out, came on Christmas Eve. “He told me: ‘you’re going to Korea in the morning.’ And you know what? I did.”

The equipment Lamar worked with—and at times repaired—was one of the first attempts to enhance imagery collected by satellites. “I spent many hours working on programs so that the military could glean more information from the imagery,” she said.

This work sent her around the world—to Korea, Yokosua Navy Base in Japan, Clark Airbase in the Philippines and many others. “Each time I was sent somewhere, my husband would say “There goes my little girl with her toolbox and mechanic’s outfit.’”

Lamar’s husband, who was a Professor of Geology at the University of Southern California (USC), also enabled the couple to travel around the world. “We were fortunate to see some of every continent,” she said.

While math and science are central to Lamar’s career and life, no story about her life would be complete without mentioning ice skating. “I couldn’t keep time to music when I was younger,” said Lamar, “so my father wanted to give me something athletic to do.” Ice skating became that thing: her daily practice before and after school (and always after homework was completed.)

As recently as 1999, Lamar was still skating competitively on a Precision Team in Oregon. When she relocated to Reno, she ran the skating school at the former Rink by the River. “One of my skating instructors was having trouble with her Math 120 class, and so I agreed to help her, and she went from a C to an A. She kept telling me that I should apply to teach. I thought she was crazy: I mean, who would hire me? I was in my 80s!”

However, she submitted her application to TMCC and the call came, asking if she wanted to teach. That was 2011—and the rest, as they say, is history.

The classrooms of today present the same mathematical concepts that challenged Lamar nearly 70 years ago, but the milieu in which these challenges are presented has changed. Technologies like cell phones and social media distract from the kind of concentration that success in math—or in any professional field—demand of young college students who are only beginning to discover what the world can hold for them.

“I think we ask a lot of our students to make a decision about what they want to do for the rest of their lives,” she said. “Those decisions—they take time.” However, witnessing student success is what makes Lamar’s work fulfilling for her. Her students, she says, run the gamut of ages from 17 to 71; some face challenges such as learning or physical disabilities.

Yet, Lamar’s students succeed. Three of her students have already passed their ACCUPLACER exams this semester, joining a handful of others who succeeded in the Fall. She hopes that the spark—the fun—of learning for learning’s sake (not just to pass an exam) compels students to explore their classes, to push themselves beyond just finding the solutions to problems, but to understand what the solution means.

Because… who knows where math and science can take you? For Lamar, the sky was—and is—the limit.

For more information about the Math Skills Center, contact the department at 775-674-7696.