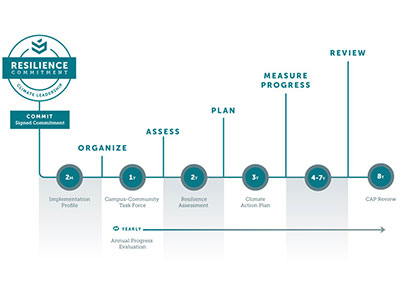 TMCC is one of eight institutions of higher learning in the United States to receive recognition for its efforts in sustainability and preparing students to be 21st century leaders.

Truckee Meadows Community College received an honorable mention from the 2018 Climate Leadership Award for its excellence in Student Preparedness. The award, which is supported through a partnership with the non-profit organization Second Nature and the U.S. Green Building Council (USGBC), recognized our efforts to create educational opportunities in and outside of the classroom to prepare students for climate change, the new green economy and partnerships which have created experiential learning opportunities that link our campus to the community.

TMCC was among eight institutions nationwide that received recognition for meeting several key milestones that teach and support the next generation of 21st century leaders.

“TMCC has partnerships with local government and businesses to prepare students for the New Nevada," said YeVonne Allen, Program Manager for TMCC’s Office of Equity, Inclusion and Sustainability. “The Governor’s Office of Economic Development (GOED), Workforce Innovations for a New Nevada (WINN) has awarded TMCC a grant that supported two high school student cohort groups. These students earned college credits, and eligibility for a $17-an hour job at the Gigafactory for Tesla, Inc. or Panasonic Energy of North America.” Further collaboration with community partners has resulted in several certificate and degree programs, such as Advanced Manufacturing and Robotics and Panasonic Preferred Pathway, or P3, Program.

“For the past nine years the Climate Leadership Awards have elevated colleges and universities making meaningful progress toward mitigating the effects of climate change. This year, we recognized campuses whose sustainability commitments are not only holistic and collaborative in scope, but also quantifiable in terms of the benefits provided to their students and the community,” said Jaime Van Mourik, Vice President of Education Solutions at USGBC.

Under the direction of TMCC President Dr. Karin Hilgersom and then-SGA President David Turner II, TMCC signed a Resiliency Commitment with Second Nature in 2016, which was intended as a pledge to build a sustainable future on our campus and in the community. Since, TMCC has implemented sustainability across several campus structures and in the fabric of the campus culture itself. In addition to four solar arrays, two wind turbines, and two Verkek Electric vehicle charging stations, TMCC’s 13 water bottle refilling stations have, to date, saved 6,466 single-use items from landfills—an amount that is equal to 38.75 oz of plastic, 194.14 lbs of waste, 3,683.78 kWh of power, 1,099.22 lbs of emissions and 59.44 sq ft of land. These measures incorporate students and staff, and making the entire campus a community focused on a sustainable future.

“TMCC is committed to educating and empowering students to be effective stewards of the environment. Through higher education, we instill knowledge, virtue, and a desire to sustain our beautiful earth. We also teach that sustainable practices can align with economic development and prosperity,” said Dr. Karin Hilgersom.

On average, schools involved in the Climate Leadership Network produce 47% less carbon pollution and use 27% less energy than non-signatory institutions. Second Nature encourages institutions of higher education to embrace internal climate priorities, and at the same time understand how those priorities can reflect and support climate goals that transcend the campus’s physical boundary.

“President Hilgersom has been a champion of highlighting environmental sustainability on campus with our Second Nature Resilience Commitment, and as a result, TMCC has numerous initiatives that are geared toward sustainability and environmental resiliency,” said Allen. “A partnership with the Regional Transportation Commission provides discounted bus passes for students, faculty, and staff. The TMCC Gardening Club received donated materials to create campus-use gardening beds. The TMCC Environmental Health and Safety Office assists organizational units in meeting their responsibility to protect the environment and to provide a safe and healthful place of employment and learning.”

In addition to on-campus initiatives that include a Bike Repair Station to enhance the biking experience of students, faculty, and staff, TMCC is on the path to eliminate HCFC and HFC refrigerants by employing a robust refrigerant management system. The College is increasing energy efficiency on campus through LED lighting retrofits, replacing single pane with insulated windows, and upgrading the campus wide building management system to achieve a better integrated high performance buildings. TMCC is also partnering with NV Energy for the NVGreenEnergy Rider renewable energy agreement with the goal of becoming the first institution of higher learning in Nevada to operate on 100% green energy.

For more information about TMCC’s efforts in promoting sustainable practices, contact the Equity, Inclusion and Sustainability Office at 775-673-7027.