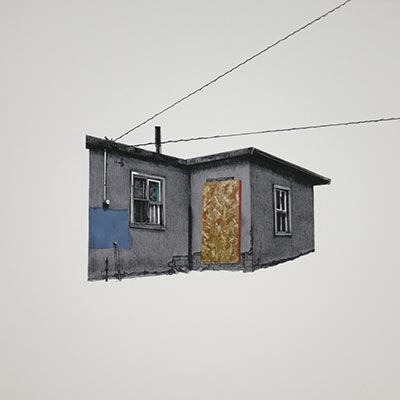 The TMCC Art Galleries will showcase Fall 2018 exhibitions, which will be on display Wednesday, November 7 through Thursday, December 6.

An artist reception will be held on Wednesday, November 7 from 5–7 p.m. in the Student Center, where Amie Rangel, an award-winning artist, will present Dwelling, a talk about her art and processes at 5:30 p.m. Refreshments will be served, and all exhibitions are free and open to the public.

The TMCC Main Gallery will feature Dwelling by Amie Rangel. Currently faculty at the College of the Sequoias in Visalia, California, Rangel received her BFA in drawing and painting from California State University and her MFA in drawing and intermedia program from the University of Alberta in Edmonton, Canada. Amie considers herself an observation-based artist and this body of work, Dwelling, is in response to relocating to Albuquerque, New Mexico. All the drawings and prints in this series depict select moments in time at an apartment complex located near her home from 2013–2018. Differing slightly from her previous work, she feels that she has “...become the voyeur or spectator witnessing the subtle changes of the various occupants arriving or departing…” The organization of the different structures and how they are presented in her work is to raise awareness of spatial and social constructs within modern human society. Rangel has exhibited at Vane Gallery in Newcastle, England; Banff Center for the Arts in Banff Alberta; Art Gallery of Alberta; Bakersfield Museum of Art, California; and Appleton Museum of Art, Florida.

Blessings Given, Blessings Received, artwork by Melissa Gill will be featured in the Red Mountain Gallery. Originally from Tucson, Arizona, Gill holds a BFA from the University of Arizona and MFA from Indiana University, Bloomington. Currently she is Associate Professor of Drawing and Printmaking at Hendrix College. This exhibition features a series of mixed media prints and a selection of works on paper and fabric inspired by an exhibition of Japanese kimonos and Persian prayer rugs at the Textile Museum of Canada in Toronto. Generally focused on the human figure, “the imagery, materials, colors, patterns and decoration of certain ritual objects, that through the human act of embellishment, had been transformed and used for a sacred purpose…” highlighted the ways in which form exists as not only physical, but a penetrable field of energy. Her choice of imagery is rooted in Buddhist teachings on interdependence, emptiness and loving kindness. Gill has taught art courses and workshops at Pratt Fine Arts Center in Seattle, Washington; Interlochen Arts Academy in Michigan; the Accademia del’Arte in Arezzo Italy; Rockford University; and Arkansas Arts Center Museum School.

Aaron Coleman’s Royal Dirt will be on display in the Erik Lauritzen Gallery. Born in Washington D.C., Coleman is an Assistant Professor of Art at the University of Arizona. He received his BFA from Herron School of Art and Design in 2009 and his MFA from Northern Illinois University in 2013. Earth is a disaster area, a gigantic crime scene. “Social media, news, advances in technology, television, music and movies constantly bombard us. These are the distractions that keep the masses pacified.” Police brutality, racial discrimination, religious extremism, persecution of the LGBT communities, economic unrest, global warming, species extinction, habitat loss, holy wars, power trips and ego mania are the extremes that his work addresses. His work takes on the characteristics of this global chaos – each piece an explosive combination of comic book pages, religious iconography and advertising which illustrates a world in ruin and the heroes and villains who occupy it. Typically layering several printmaking techniques in each of his prints, he utilizes color, pattern, texture and appropriated imagery to re-contextualize these distractions. Rips, tears and non-traditional surface treatments convey a sense of pointlessness to our material world and beg the viewer to consider the larger roll we play as humans.

In the Red Mountain Student Gallery, Macario Mendoza will present Reflections: Exposing Photography for its Mystical Properties of Light. An alumnus of the TMCC Fine Arts Program, Mendoza is currently pursuing a fine arts degree at the University of Nevada, Reno and would ultimately like to become an educator. In order to show that there is more to photography than just pressing a button, Mendoza has created the photos in this exhibit using long exposure techniques in dark environments with alternative light sources. The process he uses produces a mystical image that “breaks the reality that only seems as concrete and shows that we are capable of capturing more than just a snapshot of life.”