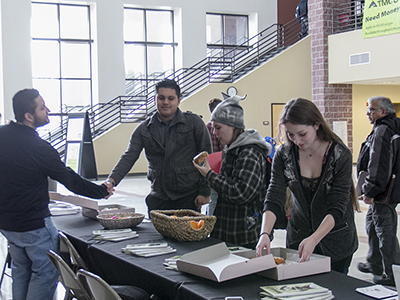 Students tabling in the Student Center at TMCC.

General elections are approaching, and a student-run project at Truckee Meadows Community College is organizing to teach students and the community about nonpartisan politics and creating lifelong voters and an informed citizenry.

The Campus Election Engagement Project (CEEP) is a nationwide program that TMCC’s Student Government Association has taken part in for the last four years that helps organize student leaders to learn about and keep their peers informed of the election processes.

“For the students that do get involved, they build some really good leadership skills,” said Nicole Shimabuku, Coordinator of Student Life and Development.

This year, CEEP and the Student Government Association is looking to create a special committee for elections, and not just federal and local elections, but student body elections as well. This committee, which will be made up of staff, faculty and students, will help organize initiatives for students to not only vote, but to cast an informed vote no matter what election they are participating in. The committee is still in the early stages of formation, and is currently accepting new members. You can contact Nicole Shimabuku, Coordinator of Student Life and Development, if you are interested in joining.

Parker Lindner is the Nevada Director for CEEP, and oversees election engagement activities at TMCC and other college campuses across the state. Each campus has student fellows who are responsible for setting goals and putting them in action at their own campus. TMCC has two student fellows, and there are ten fellows in the state.

“CEEP helps to fund the student fellows during the election season. Basically they do the leg work and the peer-to-peer work,” Lindner said. “We train them in how to do nonpartisan organizing, how to get people to share their passion and talk about their reason for voting, and show them techniques for engaging people and getting them out to vote. We set some goals together and the fellows make realistic plans to move the agenda forward.”

The student fellows who are chosen to lead CEEP put together several activities and opportunities for students to engage in the elections process. One year, students hosted a candidate forum with the Washoe County Sherriff candidates. Another year, students participated in a debate viewing party. In addition to these events, student fellows and student volunteers work together to organize tabling at campus and they even visit classes to give out nonpartisan information about candidates, issues and how to register and vote.

“I think it’s really important for the future of our country to make sure we’re encouraging students to get involved and get educated about the voting process,” Shimabuku said. “It’s hard to be an informed citizen, especially now.”

The fellows and CEEP advisors are in the beginning stages of creating an action plan for the upcoming election, but one thing they are sure of along with registering voters is to give those voters the tools and knowledge to access information about their candidates and the issues before they cast a vote. It’s one thing to get out and vote, but it’s another to make an educated vote.

The first event the CEEP fellows and volunteers will be organizing is National Voter Registration Day on September 25. Volunteers will be available on campus to help register students to vote, and get them acquainted with the elections process and what to expect next. CEEP is a great opportunity for students to get engaged with the College and also become more involved with the democratic process as a whole.

If you are interested in volunteering for the Campus Election Engagement Project, or if you would like to join the newly formed elections committee, please contact the Student Government Association.