If I Can, You Can 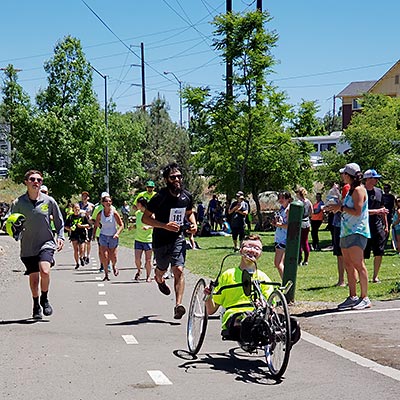 Jonah Vandever rides a hand cycle, competing in the Reno-Tahoe Odyssey Relay, June 1–2. He is also raising money for computerized knees on GoGetFunding.com.

Jonah Vandever volunteered for six annual summer veterans’ programs in Breckenridge, Colorado to encourage those who have lost limbs, sharing his own story about how a person who has lost his legs can hike, ski, play drums, and participate in marathons.

And he does them well, welcoming and living every moment.

During these programs Vandever found his passion to become a motivational speaker. He graduated from Robert McQueen High School, and is now pursuing an Associate of Arts transfer degree at Truckee Meadows Community College.

“Yup, it was definitely an experience I’ll never forget, seeing the experiences that they’ve been through in places like Iraq,” he said.

Students and staff at TMCC also inspire him, making his experience of going to college meaningful and memorable.

“I like the socialization of meeting different people, seeing why they go to school or why they stay in school, what motivates them,” Vandever said. “Also, the interesting professors—their experiences of why they came to TMCC. Even though they may have struggled, it brought them to where they are now.”

His message to fellow students is to have hope no matter what obstacles seem to appear in the way.

Unique Partnership for a Local Race

The Reno-Tahoe Odyssey Relay held June 1–2, is one of Vandever’s most recent accomplishments.

Sarah Green is the company’s Vice President of Operations.

“There are about 200 teams that participate in the race, with the object to conquer, achieve, and some to win,” Green said. “Our company mission statement is ‘Caring people, serving people, improving lives.’ We’re inspired by Jonah. The impact of Jonah is from his sense of humor, passion for life, desire to see the positive, and the goal to make a difference.”

Mission Senior Living is a member of the Nevada Caregiver Coalition, and Green met Vandever’s mother Steffini when she was given an award at the annual Nevada Caregiver Awards Luncheon in late December. The nominations were read at the event, and Green knew then that she wanted to meet the family described in the letter.

“She is an amazing woman—she runs a home day care and is also the primary caregiver for Jonah,” Green said. “Jonah is active, hiking and skiing, and participates in marathons.”

Green discovered that Vandever is in need of new prosthetic limbs. Because he is now over the age of 20, he is aging out of a prior funding assistance program.

“Jonah used mechanical legs which limited his active life, but then two Marines offered used computerized knees to Jonah,” she said. “He can even run with the computerized prosthetics. The knees tie in to an app on his phone. Once a year the legs go to Australia for servicing until they are out of warranty. They will be out of warranty in about 4–5 months. Then, they won’t service them any more.”

Green and the Mission Senior Living team asked Vandever to join them in the relay not only because he is an inspiration to them, but also to bring more awareness for his GoGetFunding page posted to raise money for a set of new computerized knees.

Together with Jonah, their relay team added up to 14 members, including one spot shared by two people.

For the Reno-Tahoe Odyssey Relay, Vandever used a hand cycle rented from the City of Reno to complete sections #1 and #36 of the race. Team members pass a band to the next section's runner.

“It's a strap you put on your arm, and it turns into a wristband that you give to the next person in the race,” Vandever said.

Each team member typically completes two or three sections of the race. Mission Senior Living chose two sections for Jonah that included the most even surfaces, bike lanes, and ease for transporting the hand cycle to the needed location.

“It was a combination of both hilly and flat parts,” he said. “I usually do my races in San Diego and it’s a lot more hilly there.”

“It's really, really fun—it works out my body, it gets me going to get in shape,” he added.

Vandever completed the first 4.8 mile section of the Reno-Tahoe Odyssey Relay in 38 minutes, and on the second day he rode the last 5.4 mile section in 52 minutes.

Mission Senior Living has run in the Odyssey in prior years, and hopes that Vandever will join them for the relay from now on.

From Starting College to the Future

The adjustment to college has smoothed out after the first two tough semesters.

“My first and second semester, in 2016, there was an English teacher—Aaron Gomez—who was my motivation that got me through the troubling times of starting college,” Vandever said.

After finishing his degree, Vandever will transfer to the University of Nevada, Reno to major in Communications. Once he becomes a motivational speaker, he hopes to bring his message to audiences abroad. Green is confident that not much could stop Vandever.

“We might have aches, we might have pains, but if he can have the determination to get up every day and keep going, we can too—he inspires all of us,” she said.

For more information about the Disability Resource Center at TMCC call 775-673-7277, and for more on Vandever’s fundraising effort toward a set of computerized prosthetics, please visit GoGetFunding.com.