The Legacy of Jeane Jones 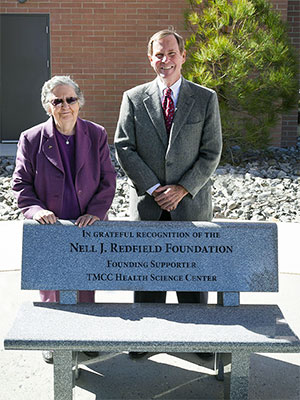 When Helen Jeane Jones, EdD, passed away on Jan. 24, her legacy at Truckee Meadows Community College had been securely in place for many years. As a former TMCC Foundation Board member, and as the driving force behind the establishment of the Nell J. Redfield Scholarship Endowment, Jeane was a consistent advocate for TMCC’s role in the community. In 2002, Jeane received an honorary associate degree and President's Medal from TMCC.

Cary Groth, TMCC Foundation Board member, and close friend of Jeane’s, said at her memorial, “...she served our community and went to work each day with the mission to help. Jeane was a true friend. God bless Jeane for all that she did for our community, for the true friendships she made along the way, and for the incredible legacy that she leaves behind.”

As the long-time Director of the Nell J. Redfield Foundation—from its formation in 1974 until her death—Jeane was very active in identifying philanthropic causes in the community for the Foundation to support—from education to healthcare and care for underserved populations. TMCC was a consistent and fortunate recipient of Jeane and the Nell J. Redfield Foundation’s generosity. Redfield Foundation's support has touched a diverse range of programs throughout the College, including the art galleries, Child Care Center, health sciences, theater and performing arts, the Elizabeth Sturm Library, and the Success First Summer Bridge program.

Perhaps most visible are the Foundation’s namesake TMCC sites, including the Redfield Campus in south Reno, which houses the William N. Pennington Health Science Center, and the Nell J. Redfield Performing Arts Center.

While Jeane’s influence is felt far and wide at TMCC, her lasting legacy is best represented by the inception of the Nell J. Redfield Scholarship Endowment, in 1989. With the help of a federal government 2:1 matching program, the endowment has grown to a current market value of $973,345. Annually, this scholarship generates six $1,000 awards for students who are displaced homemakers, and twelve $1,000 awards to students participating in Disability Resource Center programs. In addition, a smaller portion is distributed to the Foundation’s unrestricted endowment. Since 1989, the endowment has generated hundreds of awards to TMCC students.

Every day at TMCC, students and faculty are touched by Jeane’s generosity and personal endeavors to advance students at the College. At the time of Jeane’s passing, the Redfield Foundation had donated over $4.2 million to the College, ensuring Jeane’s legacy long into the future. Gretchen Sawyer, TMCC Executive Director had this to say about Jeane: “We will always be grateful for Jeane's tireless advocacy and generous support for our students and the College. She will be dearly missed but we look forward to carrying on her legacy at TMCC."

To learn more about establishing an endowment at TMCC, or for more information about scholarships, please contact Development Officer Stefanie Givens, TMCC Foundation at 775-673-8262.