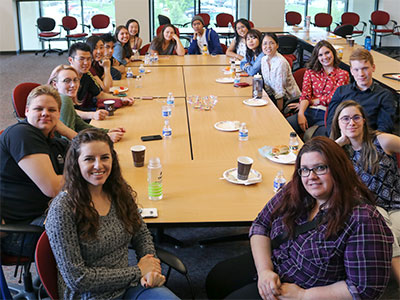 Truckee Meadows Community College Student Government Association (SGA) is marking a new year starting in mid-May when a fresh group of senators and officers took the oath of office to serve for the 2018–2019 academic year.

Eight new representatives of the student body have taken office, participating in a day of activities on Transition Day, May 15.

One of the traditional tasks of Transition Day was the passing of the gavel from 2017–2018 SGA President, Kimberly Tran, to the incoming SGA President, Ahtziry Vasquez.

Other activities were meetings, team-building games such as Family Feud, and a brainstorming session for projects to consider in the coming year.

Each senator will lead a project during their term toward a goal they would like to accomplish on behalf of the students. They will request and coordinate funding for their chosen project.

Jarod Haren is the newly-elected SGA Vice President. He is a business major at TMCC. He anticipates graduating with a TMCC High School diploma and his associate degree at the same time next May.

“My goal during my term is focused on improving student-government relations, that is student body awareness of SGA,” he said. “Currently, not many people even know what the SGA can do and I want students to have their voice heard in their leadership.”

Ashley Maples is deciding between English or anthropology for her major at TMCC, and plans to graduate in December 2019.

“When I campaigned for senator, my goal was, and is, to create a better college experience for the students—by getting more recognition for clubs and on-campus events, as well as more students involved with what goes on,” Maples said. “I also want to support the community garden. I want to try and give the SGA Community Garden Club some more recognition and get more people involved with the garden.”

Yuki Hida was also elected to be a 2018–2019 SGA senator and anticipates graduating in May 2019 with an Associate of Science transfer degree.

“My personal goal is to balance study and SGA,” Hida said. “My vision as a senator is to make more opportunities for mutual interaction between students.”

New senator Rachel Holderread would like to be a voice on campus for everyone, including students with a disability.

“My goals are to strengthen the TMCC community, promote clubs and student events and continue TMCC's focus on inclusiveness and efforts to make our campus more accessible and useable for everyone,” she said.

“One senator will need to be appointed because one of the elected candidates did not meet one of the requirements,” said Rick Floyd, Student Life and Development Specialist. “The other positions will be Student Life student workers taking over those roles.”

Senators will not take specific positions representing College divisions as they did in previous years.

“We are not divided by any position this year,” Hida said. “All senators won as just senators.”

Interested students may inquire about the open position representing the student body by completing an online candidacy petition, or contacting the SGA office. SGA senators are paid positions.