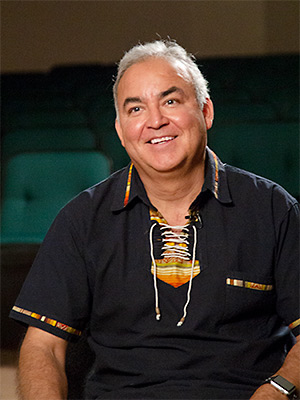 Truckee Meadows Community College 2017-2018 graduate Humberto Hernandez shows the world an easygoing and relaxed smile that does not at all reveal the hard work and grit he has put into his education, career, and the pursuit of a better life.

One of his proud accomplishments is a bachelor’s degree from the University of Nevada, Reno, as well.

He has traveled a long road, but says that it has been a great and eventful journey, at times difficult, but never too challenging to help a fellow traveler on the way.

“I was born in Navojoa, Sonora Mexico—I’m one of 16 children and was raised with five brothers and six sisters,” he said. “We lived in a very small house where I slept on cots with my brothers in one small room. Being one of the smaller boys, I slept on a dirt floor many times.”

Hernandez was raised with 11 of his brothers and sisters, and with so many kids, visitors would almost lose count.

He started working at the age of seven, and by nine years old he was used to getting up at 4:30 a.m. to sell newspapers, before being ready to head to school at 7:30 a.m. When he was 12, he worked at the Hotel Aguilera in the front, checking people in after hours. That’s where he was also able to get out the books and work on homework.

“My mom was a great cook,” he said. “We made tamales to sell on the streets, or we sold pozole—a hominy soup with pork. Or we also sold birria—a goat or beef stew—to people who placed orders.”

He came to America at 15, traveling 1,500 miles to cross the border illegally with his sister Sylvia. They joined his oldest sister, Estela, who lived in Reno. He attended the ESL program at Wooster High School, and graduated in three-and-a-half years.

Hernandez attended TMCC for one semester, but without legal status didn’t qualify for financial aid. So back to Mexico he moved, and completed his first Associate Degree, Computer Programmer/Analyst at a technical community college in Guadalajara, the second largest city in the country.

He was hired by the University of Guadalajara IT department and worked there for two-and-a-half years before returning to Reno.

Working and Studying at TMCC

In 1987, Hernandez at last resumed his studies at TMCC, and as a student worker, took a custodial job.

He quickly achieved new goals—in his second semester back at school, he was hired as a computer lab monitor, and then landed a full time job as an administrative assistant with the English for Amnesty program. In that role, he developed and coordinated English as a Second Language (ESL), GED, and citizenship classes for Amnesty applicants.

When the program ended in 1993, he transferred to TMCC Workforce Development and Community Education and continued his work with the ESL program, GED, citizenship support, and held computer workshops for non-native English speakers.

“I’ve helped 3,500 people obtain citizenship—we had a 99 percent success rate with the program,” he said. “Citizenship is a huge step for them, a great accomplishment.”

At that time, after students completed the WDCE citizenship classes, an immigration team would come and ask the applicants 10 questions randomly selected from the 100 possible. As soon as they answered six of the 10 correctly, and wrote two sentences acceptably in English, the test was considered passed, and all that was left was to take the oath.

“I’ll never forget this one older man with a long beard and big turban—he came up to me, grabbed me and kissed me on the mouth—he was so happy to have passed the test,” Hernandez said. “I said to myself, just breathe, it’s a culture thing. You meet so many cultures from all over the world.”

Hernandez became a U.S. citizen himself at that time.

In the early 2000s, he worked in the TMCC IT Office, the Applied Technology Center, and finally as a Career Specialist and Academic Advisor in the Counseling Center. He assisted students with academic planning to meet degree requirements, and preparing for their chosen career.

Because of the Nevada System of Higher Education (NSHE) tuition discount offered to employees, he began to take two classes each semester. Hernandez firmly believes in lifelong learning.

“I received three previous associate degrees from TMCC; an Associate of Arts transfer degree, another in General Studies, and one in Fire Science Technology,” he said. “I also completed an Emergency Medical Technician certificate.”

He completed a Bachelor of Arts Degree in Spanish, with a History and Spanish Translator Emphasis at UNR in 2013.

Hernandez Has Advice for Students

Hernandez is now earning his fifth college degree, an AAS in solar energy this year, after he officially retired from TMCC in 2015 with emeritus status. For him, lifelong learning is also about traveling.

He and his wife have recently completed a more than 16,000-mile journey with their RV—they wanted to travel to every state in the continental United States. The two even took a picture of each "welcome to" sign.

“You know, I remember being nine years old, laying on that dirt floor dreaming of someday making something out of my life,” he said. “Today, I can stand tall and proud, with several associate degrees and one bachelor’s degree and say ‘Si Se Puede, Yes you can.’”