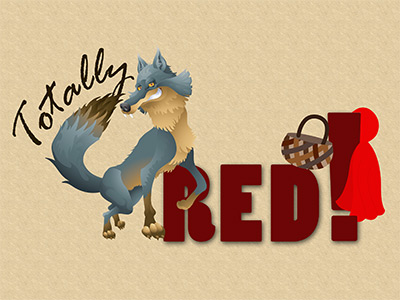 "t’s a creative and fun adaptation of the classic tale Little Red Riding Hood,” said Sarah Klocke, TMCC Theater Instructor. “The show is enjoyable for all ages because it’s both funny and captivating—there are charming characters and several entertaining theater styles."

The opening scenes of "Totally RED!" are performed in a humorous storybook theater style. Then, the tale is portrayed again in multiple and contrasting styles of melodrama, American musical theater, Elizabethan, avant-garde, 1980s hip-hop and other genres. Each retelling is about five minutes long and is unique from the ones before.

"The show has had a lot of positive media reviews,” Klocke added. “The Daily Globe reviewed it as ‘appropriate and appealing for families and children of all ages,’ and I wholeheartedly agree."

Kingsborough Performing Arts Center (KPAC) in Brooklyn, New York describes "Totally RED!" as a unique retelling of the classic tale of "wit and deception," and the Brigham Young University ScholarsArchive praises the musical score as "playful and catchy."

Prior to the public performances, the show will be presented to more than 1,500 Washoe County School District (WCSD) students. These are matinees, with the children attending as a field trip during their school day.

After each show, the cast remains on stage and the kids have a chance to ask actors and staff questions about rehearsals, costumes, dancing, props and other aspects of the performance. The goal is that the young students have a fun and educational show experience, being introduced to varied methods of acting and telling stories, Klocke said.

The show was written and composed by Dinah Toups and Barbara Walker.