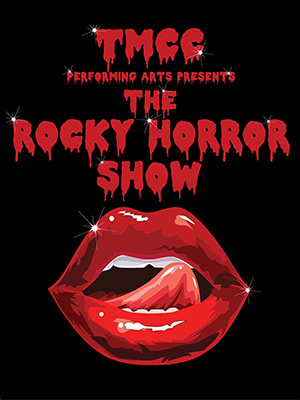 “I’m excited ‘The Rocky Horror Show’ is a part of this season; it’s a lot of fun and a film cult classic—and just like in the movie, the live musical has opportunities for audience participation,” said Marshall Carby, Theater Instructor at Truckee Meadows Community College.

TMCC Performing Arts last presented Richard O’Brien’s “The Rocky Horror Show” during the 2009-10 season. Performances were sold-out that year, and TMCC instructors decided to bring back this popular musical for multiple performances.

“I’m a big fan of the movie—the movie dances were so outlandish, campy and over-the-top that it just pulls you in, grabbing your attention,” he said. “It keeps you guessing what will happen next. I was 15 when I first saw it, and watch it about once a year or more around Halloween time—at least 20 times total.”

Fellow performer Dani Jasper said that her mother told her stories of dressing up in the costume of the main character, scientist Dr. Frank N. Furter when she was a pre-teen and teen attending midnight movie showings.

“I grew up with the show because my mom is a big fan of it,” she said. “I thought it would be fun to be part of the show.”

If audience members would like to attend TMCC’s production in costume, Carby said that it is welcome and encouraged.

In this fast-moving musical, performers dance while they sing, and remember their spoken parts as they move, enter and exit.

“You have to be doing all of this at once, and you have to act out a character that gives motivation for everything you’re doing at the same time,” Zuniga said. “So you have to multitask all of that at once on the stage.”

Jasper agreed, and added that she also grew as a performer while working on the show.

“It really pushed my comfort zone,” she said. “I’m modest, shy and soft-spoken, and you can’t be that way for the show. It’s a risqué show, melodramatic, and there’s a lot of audience participation that brings humor into it.”

The lively choreography and dancing is one of their favorite parts of the show.

“I like ‘Hot Patootie’ because it’s super jazzy and fun to dance to, with some partner work—it’s like swing music,” Jasper said.

“It’s the classic number for the show and everyone knows most of the basic dance moves already,” he said. “Mig O’Hara kept some of the original choreography, but added new moves and made it really fresh. So we’re gasping for air at the end because we use the entire stage, jumping up and down, changing shoes for a tap section, and there’s a lot of complex and fast movement.”

The students say they are having a great deal of fun performing this musical and hope the audiences pick up on their enthusiasm and energy, thoroughly enjoying their production.

“’The Rocky Horror Show' is a unique theatrical experience; fun, interactive, and high-energy from start to finish,” Carby added.

For more information about TMCC Theater’s production of "The Rocky Horror Show," please contact the Visual and Performing Arts Department at 775-674-7610.