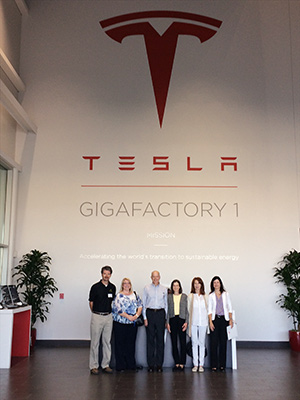 The Herb and Maxine Jacobs Foundation has been an integral part of Truckee Meadows Community College for more than 20 years, creating a legacy started by its namesakes, Herb and Maxine, and now carried on by their children and their families. The Foundation itself was established in 1986.

The Jacobs started out supporting various scholarships and programs with a later major gift to TMCC’s nursing program, which led to the naming of nursing program, Maxine S. Jacobs Nursing Program. They gave a $1 million gift toward the construction of the William N. Pennington Health Science Center. From there, their giving continued, as they saw more and more students benefiting from their philanthropy.

The Foundation started the Jacobs Presidential Scholars Program in 2013. It is currently designed to help unemployed and underemployed non-traditional adult learners (20 years and older) who are in need of learning or upgrading their job skills in order to move into a well paying, family-sustaining career.

The program has supported over 200 students, enabling them to find meaningful employment after completing a certificate of achievement or skills certificate. It isn’t just about finding a job—the program aims to help the students create a sustainable lifestyle.

According to Nayesdi Badillo-Delgado, Jacobs Presidential Scholars Program Coordinator, “We give students the transferable skills to continue to be successful” after they finish the program. Part of remaining successful means they are able to reap some rewards for their participation in the program: a credit-based scholarship for tuition and books; assignment of a TMCC success coach to provide support as they go through the program; and priority registration. Students are required to sign a mutual responsibility contract with eleven criteria that ensures they are fully committed to being a Jacobs Presidential Scholar.

Students benefit in many ways from being involved in the Jacobs Presidential Scholars Program. One student is currently going through the welding certificate program and she hopes to move into the welding field upon completion. She is a part-time student because she also has to work full time at a minimum wage job to support herself. She meets with Program Manager Amber Burroughs on a regular basis to review her academic progress and to discuss the required workshops that she attends on campus.

“She continues to meet with me as her success coach in preparation for tackling her future goals," Burroughs said. "She is ambitious, intelligent and very grateful for the opportunity to take part in this program. She is a student that has really benefited from the one-on-one success coaching component of the program.”

As this student said about attending this year’s Jacobs Presidential Scholars reception, “I wanted to thank everyone who contributed to the Jacobs grant. It’s a great thing to do, and I hope this opportunity will be open to students for many years to come. (Without the support provided by the Jacobs Presidential Scholars Program, I would not be pursuing my dream of becoming a welder.) Thanks again for all you do.”

This is just one student out of many who have benefited from the program, which has served students from all walks of life, including veterans, single parents, non-traditional students, and more.

For Jacobs Presidential Scholars Manager Burroughs, who has been in the position since the program’s beginning, there is a sense of pride when it comes to working with these students.

“I have had the privilege and honor of managing the Jacobs Presidential Scholars Program since its inception in 2013," Burroughs said. "The program has helped students achieve their educational goals and gain the career-readiness skills necessary to succeed in the workforce. I've witnessed the life-changing effects that it can have on our students and that wouldn't be possible without the continued support from our amazing donors.”

A few weeks ago, trustees Jill Jacobs, Carl Whittaker, and Deborah Kay, along with local contact Cindy Sutherland made their annual visit to TMCC to receive an in-person update on the program. They spent time at the William N. Pennington Applied Technology Center, meeting with Jacobs Presidential Scholars Manager Amber Burroughs and Coordinator Nayesdi Badillo-Delgado for an update on the program, as well as with other TMCC representatives. Barbara Walden, Director of the William N. Pennington Applied Technology Center, gave them an overview and tour of the production technology programs. Finally, they had the unique opportunity to tour the Gigafactory.

The TMCC Foundation is grateful for the relationship we have with the Herb and Maxine Jacobs Foundation for its continued commitment to the College and looks forward to working with them for many years to come.

If you or anyone you know is interested in the Jacobs Presidential Scholars Program, contact Nayesdi Badillo-Delgado at 775-856-5689 or Amber Burroughs at 775-857-4963.