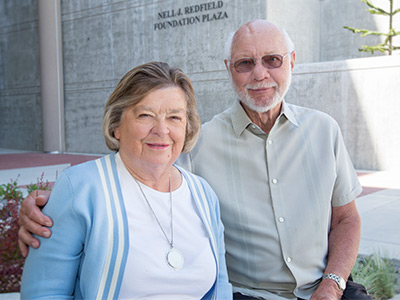 Ron Turek was born in South Dakota, the grandson of farmers from Norway and the Czech Republic who emigrated to the United States to make a better life for themselves and their family. After many years, farming in the 1930s became so unprofitable that it was difficult to make a living and the family relocated to California for a better life. From the time he was young, Turek has had a strong bent toward working hard and being educated, so he left home at an early age and headed for Southern California, where he attended El Camino College and worked various jobs before going into the U.S. Air Force.

After his time in the Air Force, he returned to school using the GI Bill and studied finance at California State University, Long Beach. After graduation, he and his young family came to Reno in 1965 where he bought a liquor store and obtained a gaming license. The pace was slow and the challenge was missing, so Turek redirected to the financial industry, a career change that proved both stimulating and challenging.

Because education is so important to Turek, he wanted to start a scholarship at Truckee Meadows Community College to support young men, particularly those who are single fathers. “I wanted to help with the transition from high school to the big school system; community college can be a stepping stone for those who are not sure if they can make it in college,” Turek said. This led to the creation of the Ron L. Turek Family Endowment, with a focus on single fathers.

When Turek was selecting the criteria for his scholarship, he wanted to be sure it went to local high school graduates and to students who had been in Washoe County for a certain number of years. Because he has been in Reno himself for so many years, he’s seen how much growth and change the city has gone through and understands the importance of investing in something long-term. He also sees this working in finance—people invest their money long-term so they have something to turn to in the future, should things get difficult and so they can enjoy life once they reach the end of their working years.

Both he and his significant other, Ann Carlson, have done a lot of traveling (getting a “life education,” so to speak), enabling them to see things they wouldn’t ordinarily have seen if they had just stayed in Reno. Although they have their weekly life routine, traveling has allowed them to visit places like Antarctica and Israel.

Turek offered this advice for those who may be struggling to decide if college is the right path for them. “Keep trying until you find a course of study that interests you. The field you go into dictates what you will do. An education isn’t the final word, but puts you one step ahead of the person who didn’t (get an education).”

He is a firm believer in community colleges, not only having attended one himself, but having supported his children in attending TMCC as well. If he can provide a little bit of support through scholarships, he’s willing to do so.

For more information on setting up a scholarship or an endowment, please contact the TMCC Foundation Office at 775-674-7648.