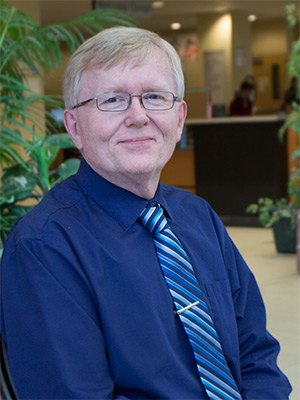 There are about six million students taking college courses online in the U.S., and a professor at Truckee Meadows Community College hopes to make a meaningful and significant contribution to enhance the quality of distance education offered to these Web-based learners.

The AACC is a nonprofit organization that provides advocacy, information resources, networking collaboration and career development opportunities for college staff members. There are 32 independent organizations that partner with the AACC, each with a functional role. One of these organizations, or councils, is the Instructional Technology Council.

Lokken will serve as Chair-elect for one year, Chairman for a two-year term, and then Past-Chair for one year, ensuring leadership consistency in the organization.

“ITC is about online education and the academic technology needs of community colleges,” he said. “The synergy of the ITC is really moving us forward. You might have a question for which you request ideas from the network of members—in a matter of hours you’ll have answers and have a challenge or problem solved relatively quickly.”

Online instruction began at American colleges in 1995, and TMCC launched its first web-based courses in 1999. Because distance learning is less than 20 years old, the new platform for instruction and its applicable technology is rapidly evolving.

Community colleges actually picked up the ball for full online courses at a quicker pace than universities. Four-year institutions tended to prefer hybrid models, with part of the instruction being in person. Lokken said that community colleges opened doors for non-traditional, working students with the adoption of classes offered entirely online.

“Every year is new, the issues are always changing,” Lokken said. “Current issues include accessibility for all, best practices in instructional design and the collection of data in order for college officials to see where their institution fits into the big picture.”

Lokken also noted the National Council for State Authorization Reciprocity Agreements (NC-SARA) as a significant contributor to accessibility for students in 48 states. All but two states have adopted this agreement that eliminates the need for state authorization of colleges to deliver courses in other states from which they’re based.

NC-SARA is the coordinating body for member states and approved institutions to establish national standards of practice for college-level online education. Recognized standards create greater accessibility and continuity for students who take courses at post-secondary schools in a different state from where they live.

At one time, before Lokken’s current political science class schedule, he was a coordinator of distance education at TMCC. He received an email from the ITC offering professional development courses—instantly perceiving that it was a great opportunity to gain the latest knowledge in this field—joined the Council. He soon became an active member.

“I thought the ability to network and share with fellow professionals was valuable,” he said. “Then I was interested in getting more involved and ran for the Board of ITC. What I brought was a willingness to begin the national survey. I’ll be doing the 14th annual survey this fall. It’s the only survey that collects a set of comprehensive data for community college distance education. There are more than 12 of these types of surveys by university-centered organizations.”

As the incoming chair of the ITC, Lokken plans to increase the national visibility of the ITC and of community college leadership in Web-based education. Today, a majority of enrollments in online classes are at community colleges.

“Online learning is making a real difference in workforce development and increased certificate and degree attainment,” he added. “But few seem to be aware of this community college success story. In addition, as institutions struggle with financial sustainability, online education offers a highly cost-effective solution that broadens access and has an outstanding track record in support of under-represented populations.”

Lokken also looks to working more closely with the AACC, an organization representing the senior administrators of community colleges. The ITC recently hosted a national webinar for AACC members on the Internet of Things (IoT), and regularly distributes the results of the annual ITC National eLearning Survey to all community college presidents. The hope is that as an affiliated council, the ITC can provide related leadership training within the AACC leadership suite for future presidents and community college leaders, Lokken said.

“Through the ITC, we’d like to prepare and empower college leaders to be better informed about technology for instruction, quality online course design, and technology infrastructure needs,” he said.

Two years ago, Governor Brian Sandoval appointed Lokken to serve as a commissioner for the Western Insterstate Commission for Higher Education (WICHE). WICHE is one of four national compacts comprised of cooperating states and territories, organized to support colleges and universities.