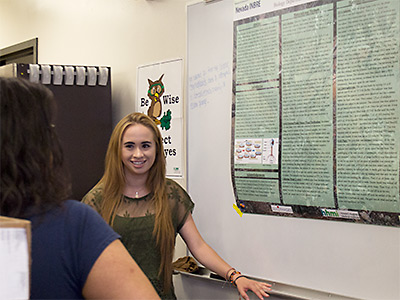 Student researchers practice on June 29 for the next day's official BioResearch Poster Symposium at TMCC.

Students who completed the Success First Summer Bridge Program in 2016 have now taken the next step as undergraduate researchers to participate in exciting scientific projects this summer, conducting experiments and assembling bioinformatics data on bacteriophages.

They presented their scientific posters at the “BioResearch Poster Symposium” at Truckee Meadows Community College on June 30. The five-week BioResearch Workshop was supported by an IDeA Network of Biomedical Research Excellence (INBRE) grant. It allowed students to do hands-on lab research projects in molecular biology.

Students participating in the summer research come from a wide array of majors including biology and other branches of science, engineering and geology.

Some of the student scientists have been greatly inspired by the workshop experience.

Cesar Rodriguez said to lab-mates during the poster presentation rehearsals that he enjoys his chemical engineering major, but this workshop has opened his eyes to new fields.

“It’s relatable to genetically modified organisms (GMOS),” he said. “If we were able to genetically modify a phage to attack several different bacteria instead of just one, we could cure a lot more infections caused by bacteria. We could use it to not only attack bacteria, but other viruses too. We might be able to cure diseases like cancer; leukemia, maybe even HIV.”

“It was a completely new experience for me,” she said. “I wanted to see if I’d like to pursue this field as a career. I enjoyed working with people who knew a lot about research, learning from them, and then also working with other student researchers who are at the same level as me.”

These undergraduate researchers have been carrying out their projects, working from 8:30 a.m.–12:30 p.m. five days a week this summer. Instead of earning college credit for the workshop, they earn a stipend of $1,200.

Most of the students have now completed one–two years of study at TMCC and are looking to transfer to a four-year university such as the University of Nevada, Reno (UNR).

The experiments sampled bacteriophage gathered in soil samples the students gathered as a group in the area of the Geiger Grade lookout summit, southwest of Reno, Nevada near U.S. Highway 50.

A bacteriophage, or phage, is a virus that can infect bacteria. Phages require a bacterial host in order to reproduce, and are named according to the strain of bacteria they infect. By studying phages, scientists gain more information on the bacteria that are harmful to humans.

“The research we will be doing may provide tools for many potential applications in human medicine as well as veterinary medicine and agriculture,” said Laura Briggs, PhD, Biology Professor.

“In EPY, the students are doing career exploration and we’re introducing them to biomedical, clinical and laboratory career tracks that they might not have thought of before,” said Julie Ellsworth, PhD, Interim Dean of Science and Nevada INBRE TMCC Site Coordinator.

The IDeA part of INBRE represents a program helping researchers in states that typically receive less research dollars to be more competitive, starting projects which lead to national grants.

Nevada INBRE is sponsored by the National Institutes of Health (NIH) to fund programs promoting science career education, including under-represented students. It seeks to expand opportunities for undergraduate research.

Further Opportunities for Next Summer

“They can come back next summer to be peer mentors for the research project or be matched with other researchers at UNR or DRI,” Ellsworth said. “It’s a continuing pipeline available for students interested in science.”

Many students will continue in these extra opportunities for research, she added.