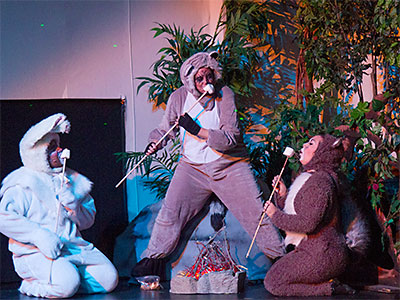 The Fall Semester production of "The Boy Who Spoke With Animals," performed by TMCC students.

Feathered, whiskered and fleecy animals scamper into a huddle on stage and ask each other, “Do humans have a sense of humor?”

TMCC Theater is staging four special performances of “The Boy Who Spoke with Animals” for Reno’s Artown celebration this summer. “The Boy Who Spoke with Animals” is a musical written and composed by Colin Ross, a Reno playwright. TMCC Theater’s Eric Bullis was inspired to bring the locally-written production to Artown for its family-friendly theme and tuneful, high-quality musical composition.

“We got involved in Artown last summer when we hosted guest performances of ‘The Lion King,’ produced by Billinghurst Middle School,” he said. “We chatted with quite a few folks and found out that there are a limited number of Artown events that focus on young audiences. As a result, we thought it would be nice to revive our popular production of ‘The Boy Who Spoke with Animals.’”

The highly visual show is fast-moving—choreography and songs flow throughout as each animal expresses its own colorful spirit in song.

“This production is entertaining for both children and adults,” Bullis added. “Parents will enjoy the positive message of the play and also the great music and dancing. The most popular and historical American musical forms—jazz, rock, blues, bluegrass, hip-hop—are represented in this show.”

The show is directed and choreographed by Mig O’Hara. Music direction is by Ted Owens, and sets are by Ty Hagar.

A Cast of Talented "Animals"

The production tells the story of a boy’s adventures with the plucky animals he has either rescued or befriended along the way.

Taj the dog expresses his feelings and canine journey in a blues song. Poopsie the bunny performs a rock and roll number—at such a speedy pace that it challenges the spotlight crew just to keep up with him. Bandit the raccoon is very "with-it", rapping a hip-hop selection under the moon.

Other animals in the cast include love-ducks, Phyllis the Spastic Quail, a cool turtle, and the feared red-tailed hawk. Human characters beside The Boy are his parents, and a bully who sets a trap next to the tree one evening.

The storyline unfolds in a way that encourages an audience to think about the world through others’ unique perspectives, Bullis added.

“The Boy Who Spoke with Animals” is a show for all ages. For more information, please call TMCC Visual and Performing Arts at 775-673-7291.