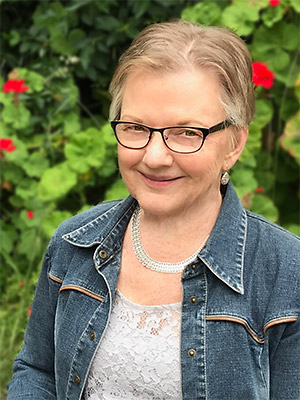 Carla King, TMCC Alumna, has now earned her Master of Social Work degree from the University of Nevada, Reno.

Carla King knows with absolute certainty that she has always been a social worker, even at the times it seemed that the academic degree was too scary to think about, let alone pursue.

She hadn’t pictured herself reaching out her hand to firmly grasp a Master of Social Work (MSW) diploma from the University of Nevada, Reno. Or, to be introduced at the 26th Annual Salute to Women of Achievement Luncheon as being selected for the Nevada Women’s Fund (NWF) Charles H. Stout Foundation scholarship.

But now she adds these two recent and treasured memories to a collection of inspirations for the new career path opening up before her.

“I always was involved in social work as a person,” she said. “I had a store and hired at-risk youth, so I’ve always been a mentor.”

A Rough Path at First

After a divorce and having to close her business in the Bay Area, she moved to Reno. King was seeking a new life, but missed her home. She decided to restart her career and was thinking about enrolling at Truckee Meadows Community College as a business major.

“I met Marcia Hoch at the Re-Entry Center and she showed me the types of support that the Center can offer students,” she said.

The support from Hoch helped her decide to take the needed steps to register for classes at TMCC. After taking some business courses, King had a spark of insight.

“Then I realized business wasn’t my passion,” she said.

So, King changed her major to something that really felt right, a profession helping others—counseling.

“Being in a small environment, and with Marcia Hoch as a mentor, gave me the support and confidence I needed,” she said. “I’ve had some excellent classes with wonderful instructors at TMCC. It’s a community. I’m still friends with women who are 25 that I met here. In this environment, you can really build these kinds of relationships.”

King earned her Associate of Applied Science, Substance Abuse Counseling from TMCC in 2013.

Although she was off to a strong start and successful at TMCC, transferring to a large university still appeared to King like a daunting mountain.

“I was terrified of going to UNR at first because it’s so big,” she added.

At one particular moment about two-thirds of the way through her first day of classes at UNR, she thought that she was really doing this and could definitely make it. Then she was distracted and fell on a staircase, splitting open her lip, along with lots of blood and embarrassment. But she picked herself up and went forward with resolve.

“I kept in contact with Marcia to get that courage to progress through my classes at UNR,” she said.

Making It to the Stage

King took it one step at a time with the support of friends, and steadily moved forward to accomplish her Bachelor of Social Work (BSW).

She applied to the Nevada Women’s Fund, and they matched her up with the Charles H. Stout Foundation Scholarship.

“The scholarship knocked my socks off—when I went to pick up the check in August, the amount of $3,500 was overwhelming,” she said. “I could work less hours and spend more time on my studies.”

It impressed her that the Nevada Women’s Fund would have faith in an older student to successfully complete such a rigorous degree program.

“A bunch of women that didn’t know me wanted to give me the scholarship just based on my essay, and they thought at age 64 I could still do it,” she said. “It showed me what a great community Reno is; I think there’s a great community here.”

To become a social worker, she was advised to attain a master’s. With growing confidence, King took the next step. And in May, she earned the MSW from UNR.

The Path Smooths Out

King has been working at the Crisis Call Center in Reno, a suicide prevention hotline. She is also checking out the region’s social work opportunities, to find the best fit for her in the next step of her career.

“One thing I love about social work is that you can work at a hospital, for the legislature, in schools or for nonprofits,” she said. “My emphasis is with trauma and crisis, but there are many specialties that look interesting to me. I’d love to work for a response team or for an organization that helps an underserved population.”

She still remembers and appreciates the support from Hoch.

During the 26th Annual Salute to Women of Achievement Luncheon at the Grand Sierra Resort on May 25, she was introduced at the podium for being awarded the Stout Foundation Scholarship.

King remarked how the kind words of Hoch kept her going through transitions, worries and new challenges.

But Hoch was confident King would reach her goals.

“Carla's is truly an amazing success story—who, like many of our students, benefit from the support found within a community college environment,” Hoch said.

For more information about the TMCC Re-Entry Center, call 673-7060. If you have a TMCC alumnus or alumna story to share, please contact Marketing and Communications at 775-673-7087.