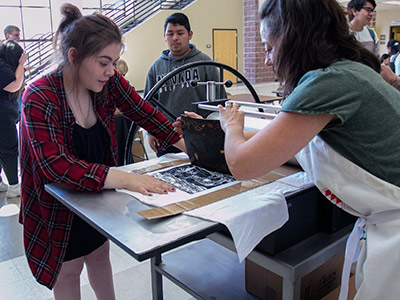 National Celebrate Diversity Month is April, and the students and staff of Truckee Meadows Community College say that diversity is one of the College’s greatest strengths—a source of pride and inspiration.

Business Major Pablo Nava-Duran said that the diversity at TMCC goes beyond nationality—that there is a great mix of people at TMCC, including diversity of race and gender.

“Diversity is about working together to have more peace, and to have quality of life,” he said.

“It’s a good thing we have Diversity Month, because it celebrates all the cultures we have in the U.S. and in the world,” she said. “Yes, we have diversity here at TMCC. We get to see the world in a different light through people of different ancestries, and international students.”

Malia Camozzi is a Radiologic Technology major, and thinks that TMCC’s diversity creates a welcoming environment.

“There’s not enough diversity in Reno—there’s a little more at TMCC,” she added. “It makes a more open environment for people to want to come to, a more friendly place.

The TMCC Equity, Inclusion, and Sustainability Office hosts information about diversity, and now includes a new page for immigrant resources.

Previously, an annual multicultural festival at TMCC had been celebrated in November as part of International Education Week, and then it was discontinued for a few years.

The Student Government Association (SGA) decided to pick up the event and brought it back in the Spring. It is now being called the Diversity Festival, and in 2017 is in its third year.

On April 20, the SGA Diversity Festival took place in the V. James Eardley Student Center, featuring tables by clubs and organizations with informational brochures on many different types of diversity, samples of international foods and presentations of cultural dances.

“When people usually talk about diversity, they only think about race, color of skin, or gender—when diversity includes many more things, such as disabilities, sexual orientation, religion, age, and more,” said Carolyn Joyce, SGA Science Senator, International Club (I-Club) member and president of the Guild Club.

New for Summer and Fall at TMCC

A new event, “Know Your Rights,” is a free informational seminar being held at TMCC to share resources and discussion about immigrants' and undocumented individuals' rights. Attendees will have the chance to ask a local immigration attorney questions in a safe and confidential space.

“A Diversity and International Student Center is planned for Fall 2017,” said YeVonne Allen, Interim Director of Equity, Inclusion and Sustainability. “There will also be a diversity intern position open for the Summer, and one for the Fall Semester.”

The Diversity and International Student Center (DISC) is taking shape as a possible student space to hang out and obtain information and resources.

The designation of a month to celebrate diversity began in 2004, with the vision by ProGroup to honor diversity for all people. ProGroup is a U.S. diversity consulting firm.

“By celebrating differences and similarities during this month, organizers hope that people will get a deeper understanding of each other,” according to Curriki, an online community of educators who share Open Educational Resources (OER) materials to benefit parents and students around the world.

Students say that they enjoy meeting a diverse set of people at the College. Arneesha H. is pursuing an associate degree in general studies at TMCC.

“TMCC is pretty good with diversity,” she said. “There’s a lot of different cultures here; it’s really cool. I even met a student from Morocco.”

TMCC student Taiyyaba is enrolled in a transfer degree program and plans on attending the University of Nevada, Reno after completing her studies at TMCC.

“It is good to know about different cultures because they have many people from different countries in the United States,” she said. “It adds to knowledge and global awareness,” she said.

For more information about Equity, Inclusion and Sustainability, please call 775-673-7027.