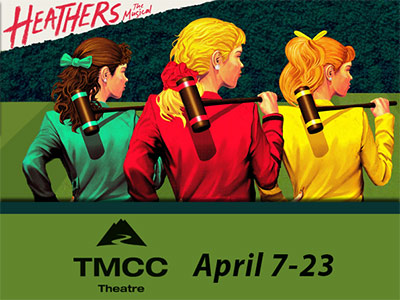 "Heathers: the Musical" a show that is fast-paced, sarcastic, dark and funny, opens on April 7, presented by Truckee Meadows Community College Theater.

This musical is based on a 1989 movie starring Winona Ryder and Christian Slater, about a strong high school clique of three girls, all named Heather. Their rule over Westerberg High School student body gets challenged by the main character Veronica Sawyer and her handsome friend J.D.

“Heathers: the Musical’” plot has spirited twists and turns that make it an entertaining show. The subject matter includes adult themes, though, and parents may consider it rated “R”.

Performances take place at 7:30 p.m. on the following weekends:

Matinees will begin at 2 p.m. on the following afternoons:

Ticket prices range from general admission $15 before the show date and $17 at the door, to $13 pre-sale and $15 at the door for students and seniors. TMCC student tickets are all $10.

The tickets can be reserved at www.showtix4u.com, and more information may be found at 775-673-7291. The Performing Arts Center is located on Keystone Avenue, adjacent to the Save Mart Supermarket. Parking is free.

“Heathers: the Musical" was created by Kevin Murphy, also part of the team for the show “Desperate Housewives,” and Laurence O’Keefe who was on the creative team for “Legally Blonde.”

This Off-Broadway show is widely known to the Millennial demographic.

“When we announced in December what the musical was going to be, the students erupted into a giant cheer,” said Eric Bullis, PhD, Theater Professor.

He said a record number of 75 people auditioned for a 35-member cast.

“There are a lot of big production numbers, big and bold numbers with 30 people dancing and singing—high energy in the songs,” he added. “The music is very well-composed, it’s Broadway-quality music. Ted Owens’ music direction of the cast is wonderfully done. Mig O’Hara’s choreography is brilliant. All three of us direct the show.”

He cautions families bringing children to the show that mature issues are explored in this story.

For more information about “Heathers: the Musical” or TMCC Theater, please contact the Visual and Performing Arts Department at 775-673-7291.