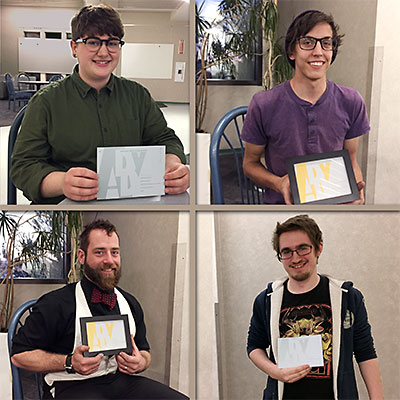 Zack Dehnhardt, a Graphic Communications (GRC) major at Truckee Meadows Community College has been drawing since he was a small child and can’t remember a time when he didn’t draw on something.

“When I was little, I always doodled on papers everywhere—I even got in trouble and got a pink referral slip, was sent to the principal and while I was waiting, doodled on the slip,” he said. “Winning an ADDY award is a real affirmation of what I’m doing here, a confirmation that I have something there (talent and skills).”

“Getting an ADDY award is a prestigious thing, and in an interview I can say that something I did was professionally recognized,” he said.

Jacob Greene won Gold for a different design, also on the theme of time—an illustration entitled "Time Slipping Away".

“People I didn’t even know came up and congratulated me,” he said. “In the future, they might remember the piece. Being in the ADDYs gets your work out there, gives you recognition, gets you in front of the industry and allows you to network easier.”

“The best part of the ADDYs was seeing how the advertising industry works, and meeting the professionals in that area,” she said. “I got to meet some people who were doing design work for a children’s cancer fund and that was really cool.”

Summer Orr, who was honored with two Silver ADDYs, agreed.

“It really gave me some idea of people with whom I’d like to network, what the various studios are creating, and comparing their work to the level I’m at right now to give me a sense of direction for the future,” she said.

“It’s definitely something that will help me on my resume and will help me to stand out,” she said. “I’m currently already full-time at ZoomAway Travel. I went through the internship program and was even on the internship panel last year. I’d highly recommend it to others, it has taken my skills a notch higher.”

A complete list of the Reno student ADDY awardees include the following student designers:

“Japan has a lot of cool culture, and we had to pick an art movement, so I picked surrealism, and I illustrated some ideas including a torii gate and sushi,” she said. “I did a lot of research while I was doing the project for inspiration, creative ideas and to get to know their culture. I was really in for a treat.”

The poster represented one of the projects students undertake in the computer illustration course.

“My poster, though it was a class assignment, was inspired from my desire to travel there some day,” she said. “I would like to say how thrilled I am to receive an award like this. I have been drawing and painting all of my life.”

Orr illustrated her detailed poster after researching the land and culture of Denmark.

“I like the older architecture in Denmark—the wooden windmills—but also they have many natural wildflower fields and tulip fields,” she said. “There are two tourists in the design and the most challenging part was to capture happiness and a carefree posture and expression.”

Murielle Campbell got the creative idea for her Silver award-winning “You Are Here” logo from the concept of a journey. The logo encourages adult learners to continue their education.

“The inspiration for my design came from the road trips we take in our lives, and to get where we’re going through our education,” she said. “The signs in the design show TMCC, Washoe County School District and other educational organizations that can help people on their life journey.”

In contrast, Hillman was inspired by a well-known designer, Olly Moss, and his work in movies and Studio Ghibli animations.

“I liked the idea to create a curving shape and place the text on that, framing it with complementary orange and blue color,” he said. “I was playing around with formatting the text in a way where you want to come in closer, drawing people in.”

Greene’s design also evolved. He completed a hyper-realistic mechanical pencil drawing of a clock’s inside parts, and then took the shape of gears into Adobe Illustrator software, digitally drawing them with the pen tool.

“The gears create texture on the snowboard, and they work together as if they could actually turn each other,” he said.

“It is definitely a modern design, something sleek—something different from what other seafood distributers (competitors) were doing on their websites, and also using the color orange,” she said.

About the ADDY Awards

The American Advertising Federation, AAF Reno is a professional association for advertising, marketing and design professionals. Students can join at a reduced membership fee.

The organization’s goals include providing scholarships for students and networking opportunities for professionals. Guest speakers from the advertising industry present specialized workshops at Chapter meetings.

AAF Reno held the annual American Advertising Awards celebration on March 10 at the Reno-Sparks Convention Center. There were both professional and student categories, judged by a panel of independent jurists.

Greene said that there were about 100 hours of work in his award-winning illustration, but it’s well worth it, as the field of graphic design is fulfilling for him.

“First I drew the woman in the rendering and illustration class and scanned the hand-drawn image in as a template,” he said. “I gathered the clock parts and piled them together to create her silhouette and then the parts move away from her arm and start to float away in space. I was thinking of spring, new beginnings, letting things go and starting from scratch.”

He added that sometimes you have to let go of some things before starting anew.

Chapman added that the GRC program is helping her toward her career goals.

“I think the graphic design program is really helping me to channel my creative skills in a direction that will help me make a living doing something that I truly love to do,” she said.

The graphics program at TMCC is built as performance-based instruction; students assemble a portfolio of work as they learn design principles, the critiquing process and software techniques.

More information about the Certificate of Achievement and AAS degree programs can be found at the Graphic Communications website, or by calling 775-673-7291.