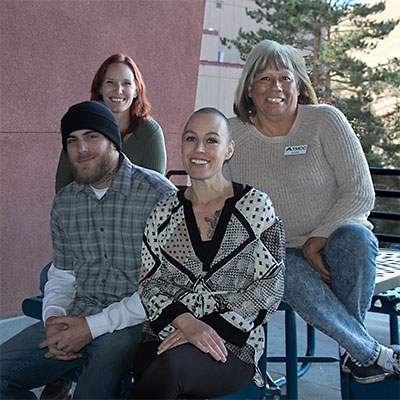 The club is the Student Government Association (SGA)-recognized TMCC Recovery and Prevention (T-RAP) club. Funding from the grant began in early December.

“Sometimes in school, people just need a sympathetic ear,” said Miranda Kinsler, Club Secretary. “What we’re trying to go for is a closer community that doesn’t have to meet around alcohol.”

“There are a lot of ‘crawls’ and alcohol-related events in town, and part of our focus is providing other things to do without a major part of it being related to alcohol,” she said.

Camille Vega, Club staff advisor said that the grant is groundbreaking because TYR—a program by a locally-based foundation—has been involved on campuses nationally, and this is the first grant provided to a collegiate club in Reno.

The TYR grant will enable expanded Club functions during the next year:

“We want to send all four officers and possibly a member at large to the conference,” Vega said. “For the next year, the Club will work on building community and meet for meals, probably off-campus.”

The grant also will provide for the creation of an online map with community recovery resources and assets that help to build a nationwide network among collegiate recovery staff, students and community members.

The Club has established a Facebook site where upcoming events will be posted.

“We participated in the SGA Halloween Club Fair,” Vega added. “We want to get together once a month for a meal and get to know each other and build a community of peer mentors—to become peer mentors for the campus. We might explore if people are interested in hikes or bowling, activities like that. So, there won’t be a big workload for members.”

T-RAP grew from Nevada Recovery and Prevention (NRAP) at the University of Nevada, Reno.

NRAP is a project of the Center for the Application of Substance Abuse Technologies (CASAT), an academic program at UNR. It sponsors communities of assistance for students who choose to live a healthy and sober lifestyle. TMCC’s NRAP community began in Spring Semester 2014 as a branching out of UNR’s NRAP, being modeled after the UNR program.

The TMCC NRAP grew and students became enthusiastic to form their own SGA-recognized T-RAP organization.

“College is thought of as the party scene, and we want to get a message out that it doesn’t have to be that way,” Norris said. “Students may be able to control it while they’re in college, but it could be a problem later. The Club is not just for people in recovery. It’s for anyone who’d like to have fun at activities not centered around drinking.”

The officers for the T-RAP club are the following:

“In 2013 The Stacie Mathewson Foundation created the 501(c)(3) nonprofit, Transforming Youth Recovery, to support educators, parents and community members in helping students in recovery thrive in the fullness of everyday life,” according to StacieMathewsonFoundation.org.

TYR was founded to help create communities at colleges that support students in recovery, promote public education about addiction, reduce stigma faced by those in recovery and support instructors and parents.