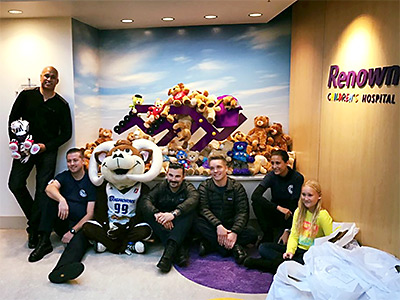 Truckee Meadows Community College faculty and staff participated in the KTVN Share Your Christmas food drive, along with students coordinated and encouraged by Phi Theta Kappa.

From Nov. 15–Dec. 8 the TMCC community donated cans and non-perishable food items into ten bins located at four of the five TMCC sites.

KTVN received four filled barrels and monetary donations from TMCC this year, and all food collected through the drive benefits five regional nonprofits, including the Food Bank of Northern Nevada.

“Inspiration this year came from Wizard’s Warehouse, a new campus resource providing food and personal hygiene items to students in need,” said Kate Kirkpatrick, Director of Marketing and Communications. “As employees learn more about issues regarding poverty, many have been inspired to participate in collection drives to help those who need it, especially during the holidays.”

TMCC delivered the barrels of food and donations to KTVN’s Share Your Christmas event at the Grand Sierra Resort on Dec. 9. TMCC President Karin Hilgersom, PhD appeared with meteorologist Mike Alger to talk about the college’s work to combat hunger and poverty on campus.

“I'd like to extend a special thank you to YeVonne Allen for helping to co-chair the effort with me this year, Will Jones and the Custodial team for distributing the barrels and watching over donations until collection day, and to Francisco and David for delivering the barrels,” Kirkpatrick said. “Also, a big thank you to Scott Alquist for years of organizing the event and guidance to make this year’s collection go smoothly.”

Phi Theta Kappa "Honorable Give Back"

Phi Theta Kappa honor society members at TMCC thought about what it means to be honorable, both in their studies and in the community.

They came up with two projects, together entitled the "Honorable Give Back".

Part one was a donation of $500 that was matched by Save Mart Supermarkets for a total $1,000 donation to the Food Bank of Northern Nevada. The amount will feed 200 people, said PTK’s Faculty Advisor, Neil Siegel.

“Donating cash to food banks can help feed even more people than when you donate cans, because many times the food resource agencies can buy food in large quantities at a discount,” Siegel added.

Part two was to bring a smile to children from toddlers to about 10 years of age.

PTK officers took a shopping trip together and picked out about $500 worth of toys to be donated to the Marine Toys for Tots Foundation annual holiday toy drive.

“Remy has the toys in his truck and is delivering them to Toys for Tots 2016 – Reno,” Siegel said. “The toys collected in Reno will go to kids in Washoe County.”

A physical education PEX 169: Yoga class at TMCC was inspired by the historical roots of their practice and came up with an idea to share the spirit of what they were learning.

“Yoga isn’t just about what you do on the mat, but how you show up in the world and in your own life,” said Brandy Scarnati, class participant and WebCollege Program Director.

Hannah Bias, the instructor, asked the class to come up with a semester-long class project.

“The students came up with a bunch of ideas for a group project and ultimately voted on this one—collecting clothes for homeless youth at Eddy House,” Scarnati said.

They called their idea the “Reach Further Project” because they agreed that when individuals practice yoga, they feel good and then approach the world around them in a new and different way.

“The response was overwhelming, and the donation bin was overflowing,” she said. “The students took to heart teachings like letting go, non-excess, giving when you can, and taking care of yourself first and foremost.”

A large donation of about fifteen 30-gallon-size bags of clothing was given to Eddy House for distribution to young people that are in need of general and cold-weather items.

“I’m so proud of our class and our amazing instructor,” Scarnati said. “Each individual contributed by reaching further to do a world of good.”

During the past two semesters, the TMCC Emergency Medical Services (EMS) Program has partnered with the Reno Bighorns and Renown Children’s Hospital in an effort to bring smiles to children and their families at a rough time in their lives.

Students of the EMS program typically donate thousands of man-hours serving the community in different projects, and one of the volunteer opportunities they take part in is "Bruno’s Bear Drive." They donate their time and money to build or buy teddy bears from the Build-A-Bear Workshop® store in Meadowood Mall. The students deliver the bears to the Renown Children’s Hospital and patients in the Renown Children’s Emergency Room.

The Bear Drive has taken place three times and it continues to grow in numbers and volunteers.

Some of the donations also came from the community, walk-ups during the drive, and NBA D-League basketball player Reggie Hearn. Local actor and movie producer, Brian Perry helped raise money and invited his friends and colleagues along to join in building bears as well as collecting online donations to help the effort, added Mike Schultz, EMS Instructor.

“The drive has become more successful and it’s such a blessing giving to these children in their times of hardship,” Schultz said. “The program is planning its fourth drive now and the bears will be delivered to help brighten the holidays just before Christmas.”

For additional donations to "Bruno’s Bear Drive", please contact JR Munoz or donate to the drive at PayPal.

Additional contributions are welcome. If you have a holiday donation drive or volunteer experience to share with the TMCC community, please let us know.