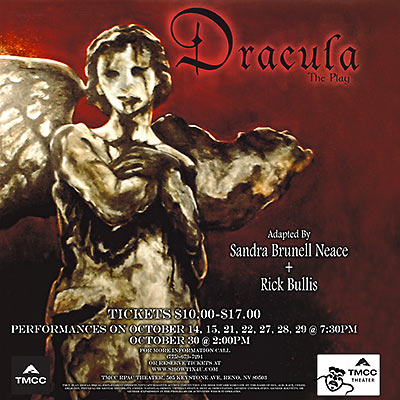 Many productions of “Dracula” have interpreted the plot as a horror story, but the original book was told from the perspective of people’s diaries about mysterious events. They worried about the secretive central character. Rather than blood and gore, a more faithful telling involves sudden edge-of-your-seat plot turns, astonishment and surprise much like an Agatha Christie whodunit.

“It’s about a good person who gets completely twisted by tragedy and goes deeper into it, becoming a predator,” said Eric Bullis, PhD, Theater and Performing Arts Professor. “The play will bring chills to audiences of all ages as the mystery unfolds, although small children are not recommended.”

He adds that the Nell J. Redfield Foundation Performing Arts Center is an exceptional venue for the play because it is a three-quarter, or thrust-type, theater floorplan instead of the usual forward-facing proscenium layouts.

“Sandra Brunell Neace is a skilled director and the show will be further enhanced by moody special effects created by technical director Ty Hagar,” he said.

Performances of "Dracula" will take place on the following show dates:

“The action mounts faster and faster—there is a lot of suspense in it and tension,” Bullis said. “It moves at a quick pace and it’s better to let the audience’s imagination take over. The mind fills in those gaps and what you don’t know is actually scarier.”

Bullis and Neace have together adapted the script to be truer to Bram Stoker’s novel. They are also leading discussions with the 20 student and community cast members about historical and cultural foundations for the story. All cast members are enrolled in a theater class at TMCC, and many of the students are theater majors.

“The students are surprised that the characters aren’t shallow, but are deep, well-crafted and experience real fear,” Bullis said.

In looking at 12 prior adaptations, Bullis and Neace found that entire characters and plot elements had been eliminated. Additional ways that some of the modern versions have differed from the original book are that vampires have been recently portrayed as handsome or sexy, and other productions have missed the part of the novel about Dracula’s love for his wife and anguish over losing her.

“The book is partially a love story, where his wife dies and in deep sadness he makes a deal with the devil,” Bullis said.

Without giving away a plot development, the two soul-mates do meet again, and the love story progresses.

“A modern concept is that vampires are handsome, but the traditional thought was that a woman should avoid them at all costs,” he said.

Also, many audiences may not be aware that Bram Stoker based his 1897 Gothic novel on the legend of Prince Vlad the Impaler, a Romanian folk warrior who protected Eastern European Christians from invading Turks in the 1400s, the Ottoman Empire’s army. Vlad is reputed to have cruelly impaled 20,000 foreign soldiers on wooden spikes.

“Bram Stoker combined the legend with possible magical abilities and what can happen when one person is responsible for that many deaths,” Bullis said.

For more information about the TMCC Theater production of "Dracula", please call 775-673-7291.