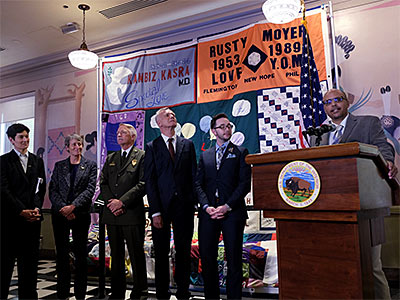 John Jeffery Auer, IV is one of the select initial U.S. authors who have completed a book released by the National Park Service (NPS) — a study telling the story of an important part of American heritage and culture.

The book, "LGBTQ America: A Theme Study of Lesbian, Gay, Bisexual, Transgender, and Queer History", was officially celebrated on Oct. 11 in Washington, D.C. It is part of a broader initiative by President Barack Obama to discover more about all who have taken part in building the nation.

Auer, a History and Core Humanities instructor at TMCC, traveled to the capital city to speak on behalf of the authors at the press conference. Sally Jewell, secretary of the U.S. Department of the Interior, also gave remarks, as well as Jonathan Jarvis, National Park Service Director and Tim Gill, Founder of the Gill Foundation. The event was live-streamed on C-Span.

“I was prepared to present, but was almost speechless to see all of the TV cameras and the event’s amazing setting in the penthouse of the Secretary of the Department of the Interior,” Auer said. “There were about 100 people who attended.”

The book’s release came at the end of a two-year theme study project, and was also part of the NPS 100-year anniversary in August.

“It was fascinating to do the research and writing, and I hope the work brings attention to Reno,” he said. “History seems far away to the area’s young people, as Virginia City and other nearby places are typically recognized. This book brings an aspect of Reno’s history to the forefront because it's now recognized by a national agency.”

The 1,200 page book is comprehensive and peer-reviewed. As a federal document, it is available to the public online at no cost. It is commissioned by the NPS for the LGBTQ Heritage Initiative to find additional national historical sites of LGBTQ significance.

Authors were assigned various subjects. Chapters include topics such as civil rights, business and labor, and art. Other chapters include research on ethnic communities, while others examine places. Authors who were tasked with writing about a city center described 10 places of historical importance in that location.

Auer’s chapter, “Queerest Little City in the World: LGBTQ Reno,” examines history and heritage in western Nevada. What was the most interesting part of Auer’s research?

“The Reno Livestock Events Center was the place where the Reno Gay Rodeo was held from 1976-1984 and its history was really interesting,” he said. “So now it has been recognized as a place of national importance and can be considered for the National Register of Historic Places. With community support, it will happen, but this process usually takes a few years.”

Going forward, the NPS will continue to add more chapters written by authors across the U.S.

Auer Was Recruited for the Book

The NPS assembled a scholars’ roundtable in 2014 to give input and brainstorm how the theme study should be organized. The national roundtable included 23 agency and organization directors, professors and thought leaders. They used previous Heritage Initiatives as examples.

Two years ago, Auer had begun work on his doctoral dissertation concerning historical sites in Northern Nevada connected with the LGBTQ community. He had also done research for the GLBT Historical Society, a nonprofit organization in San Francisco, and was known to them as a western LGBTQ scholar.

A GLBT Historical Society board member had been selected to write one of the NPS study’s chapters. He knew that Auer was an expert on Western LGBTQ history and referred the National Park Service project editor to Auer.

In working on the Reno chapter, Auer discovered more information than he expected.

“I knew I was going to go over the word limit, but the editor said ‘It’s so interesting, just keep writing,’” Auer added. “The editor also asked for some adjustments at the beginning and ending of my chapter so that it would transition smoothly to the chapters before and after.”

The authors all finished their sections in early summer, about the middle of June, he said. The NPS then arranged the release event to also coincide with National Coming Out Day (NCOD) on Oct. 11.

“Reno has now been recognized in a distinctive way nationally,” he said. “It’s a huge step for us as a city.”

The LGBTQ Heritage Initiative was made possible in part by generous donations of the Gill Foundation.