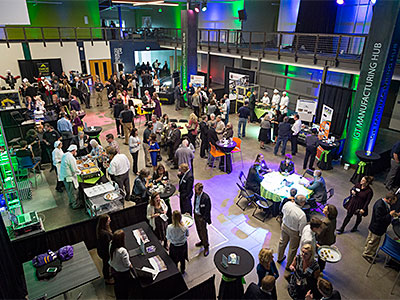 Food, Wine, and the Future a Major Success

On the evening of Thursday, Sept. 22, the IGT Manufacturing Hub at Truckee Meadows Community College’s William N. Pennington Applied Technology Center was alive with the sound of more than 200 guests learning about the latest and greatest in technology in Northern Nevada at the inaugural Food, Wine, and the Future event. Eight different companies, including Ardagh Group, Bender Group, Click Bond, Inc., Flirtey, NOW® Foods, NV Energy, Renown Health, and Tesla Motors, Inc., showcased ways people can use technology to accomplish everyday tasks, whether it’s getting something delivered via drone or saving on utility bills with NV Energy.

The idea for Food, Wine, and the Future was initially conceived by TMCC Foundation donors Bruce and Nora James, who wanted to assist with raising scholarship funds and support for programs at the Applied Technology Center. At the event, donors had an opportunity to meet two recent scholarship recipients, one of whom is studying welding and another who is pursuing the goal of becoming a radiologic technician. These two grateful students spoke about how scholarships have helped them achieve their goals while supporting their families and overcoming personal obstacles.

Other highlights of the evening included delicious food provided by TMCC’s own Culinary Arts students and wine provided by Whispering Vine Wine Company. Tesla brought a model car for guests to ooh and ahh over. Welding instructor Trenton Schoppe showcased the virtual welder, giving guests an opportunity to try their hand at welding via the computer. Baxter and Bender, TMCC’s resident robots, were on hand to greet guests and assist the culinary staff, while Wizard the Lizard mingled and took photos with guests throughout the evening.

Guests got to throw their name in the hat for one of three chess sets made by TMCC machining students. Three lucky winners walked away with the beautifully designed titanium chess sets, perfect for both playing the game and displaying as art pieces.

Ultimately, the event raised $30,000 in scholarship funds and $70,000 in funds for Applied Technology Programs, netting the TMCC Foundation a grand total of $100,000 that evening. An excellent evening was enjoyed by everyone.

Bravo is president of the student organization, Power in Culture Club and is also Student Government Association Senator, Technical Sciences Division. He is from Winnemucca and his parents have brought him up sharing rich and colorful traditions from their native Mexico. He believes that all people should be proud of their heritage.

“It’s a gift of where we’re from,” he said. “Everybody has something to bring—everyone has a unique culture to share.”

In high school, he studied chemistry, pre-engineering and working with metals. Bravo graduated with an honors diploma and is now working toward an associate degree at TMCC. He’s quite busy and works as a server on weekends.

“I’m aiming for a degree in metallurgical engineering with a minor in physics and chemistry,” he said.

At the luncheon, Bravo shared his personal experiences growing up and in school, explaining aspects of Latin American traditions and viewpoints in order to gain greater understanding among people. There are 22 unique Latino cultures which are based on Latin language roots.

The Power in Culture Club will be celebrating a special event at TMCC on Nov. 1-2, called “Dia de Los Muertos” or “Day of the Dead.” This festival originated from Aztec ceremonies that were conformed and integrated into practices of Catholic colonists to the New World.

“The Day of the Dead is a combination of Aztec rituals and Catholicism as the day lands on the same day as All Saints Day, a day that is in the remembrance of our loved ones who have passed on,” he said.

It is believed that the gates of heaven open on Oct. 31 and all souls are reunited with family members for 24 hours. The TMCC event will include demonstrations, food, music and crafts. All in the TMCC community are invited to take part, Bravo said.

In September, Julie Ellsworth, Chair of Biology and Community Health Science gave a presentation at the National Institutes of Health (NIH) in Washington, D.C.

She spoke at an IDeA Networks of Biomedical Research Excellence (INBRE) conference for principal investigators and program coordinators on Sept. 23.

Nevada INBRE is sponsored by the NIH to fund programs promoting science career education, including under-resourced students, and expanding opportunities for undergraduate research. Her talk reported the results of grant-funded INBRE projects in Northern Nevada.

“The majority of Hispanic, African-American and American Indian undergraduates in the U.S. are attending community colleges,” Ellsworth said. “One goal of INBRE is to increase the success of underrepresented students to complete biomedical degrees and enter careers in science.”

The pipeline has proved to be successful. From 2007-2012, seven percent of the total low-income student population in science transferred and earned Bachelor of Science degrees at four-year institutions. However, 48 percent of low-income students in the TMCC pipeline graduated with B.S. degrees.

“There are up to 35 students each semester involved in life science research on campus, and about 230 biology majors,” she said. “A new degree in Community Health Science has begun and we have more than 540 CHS majors.”

For more information about the Biology Department and Community Health Sciences at TMCC, please call 775-673-8251.

Additional contributions for good news are welcome. If you have an achievement, volunteer experience or award to share with the TMCC community, please let us know.