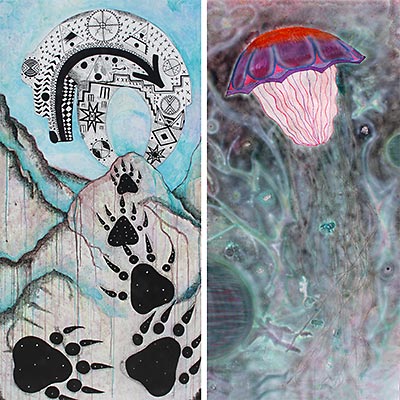 Above are art panels by Brandy Shaw (left), and David Radonski (right). Feature banner art is by April Skinner.

“If we’re going to change the world, we have to connect with it,” said Lindsey Correia in the “Reaching New Heights” film that accompanies a new fine art panel exhibit at Truckee Meadows Community College.

TMCC Portfolio Emphasis students decided in Fall 2015 to take on a service project and public art installation; goals as tall and ambitious as the dramatic paintings the artists created.

The Fine Arts majors applied for and won the bid to exhibit a public art installation in downtown Reno during 2016. They also painted larger-than-life panels expressing personal identity to be displayed for the service project to raise money for visual and performing arts at TMCC.

“The City of Reno Windows Project” features the students’ 4-by 6-foot painted panels in picture windows of the Downtown Reno Ballroom, 401 N. Center St. It is one of the City of Reno Public Art installations. There are seven tour collections, about 185 exterior sculptures and 65 interior artworks in City Hall that comprise Reno Public Art.

Eight of the art majors, one TMCC graduate, and the TMCC Student Art Club also painted 4-by 8-foot panels exhibited for a Fall fundraising show in the College’s Main Gallery on the first floor of the V. James Eardley Student Center.

A film about their personal journeys and experiences completing the project is also being shown in the gallery. The video was created and produced by John Frederick, Academic Support Center Program Officer.

“The film is powerful,” said Candace Garlock, TMCC Galleries Curator and Art Instructor. “It recounts the impact that TMCC has had on their lives.”

Jessi Fenrich has been drawing since she was two years old.

“Being a full time artist is my ultimate goal—I mean I’ve always dreamed about being an artist, since I was a little kid,” Fenrich said. “It’s always been a part of me.”

Their project began in Sept. 2015 with writing a proposal for a public art project along with artist statements and biographies, and presenting the proposal to the City of Reno. They built small scale prototypes of their final pieces to go with their proposal. The public art installation can now be viewed at the Downtown Reno Ballroom from the sidewalk at exterior display windows.

“The students had to hit three marks—creating self-expressive art for a portfolio show, thematically unified work for public art, and pieces that will sell for a fundraising gala,” Garlock said.

“I think that I am really in love with learning, and so I would like to pursue school and go into a four-year university and I would like to work as an artist while I’m doing that,” said art student Haley Willams.

Students Say Art is Their Life

One of the artists displaying art at the Ballroom and in the TMCC show is Brandy Shaw. She incorporates Sioux tribal heritage in her paintings.

“I really wanted to do art therapy, but I want to devote my time to Native youth, like troubled Native youth … I want to let them know they are worthy of life and they are worthy of opportunity,” Shaw said. “It’s tough when you’re off the reservation—it’s tough when you’re on the reservation, because you have to live two lives and you feel lonely out there. …You can accomplish things. Like, because that’s what’s going to keep our people alive—is education.”

“I think there’s kind of a confusion between art and decoration, maybe,” Correia said. “There’s like that stock art that you just can buy at a Walmart or someplace where it’s like flowers in a frame, but it’s just more of a way to decorate and make things less empty. …People think that art is so expensive, but some people are willing to sell their stuff for fairly inexpensive prices or low prices just because they’re trying to get by and they want to get their stuff out there.”

“If you want to make a name for yourself, you have to put yourself out there,” he said.

All are invited to visit the art show on display from Sept. 12–23. For more information about Visual Arts at TMCC, please contact Candace Garlock at 775-674-7698.