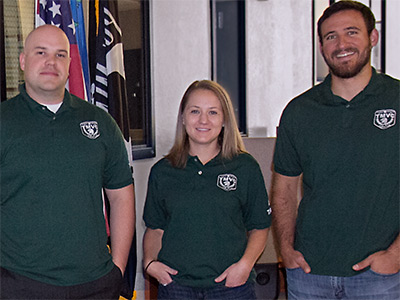 Student veterans invite the community to a dedicatory Open House, observing the support of faculty, staff and fellow students as the Veterans Resource Center (VRC) moves to a new suite of offices in Red Mountain Building, room 241.

“Every day, when you go into the VRC, you see its mission at work,” said Jon Gray, Truckee Meadows Veterans Club President. “From the student workers who assist our veterans and their families with using VA education benefits, to our partners from the V.I.T.A.L. program and other organizations, we have an incredible amount of peer support as well as the support of Northern Nevada's best programs for veterans at our fingertips right here on campus.”

“I would encourage all student veterans, whether it is their first or last semester at TMCC, to come by and see everything that the new Center has to offer,” Gray added.

Following the opening remarks by Totans, special presentations will be given by Gray and Estela Levario Gutierrez, Vice President of Student Services. Student veterans will lead tours of the VRC, and refreshments including cake will be served.

“The new Center has four times the area,” said Zack Totans, VRC Coordinator. “Vets sense the support of the school and the large space that’s been provided for them. Between 25-30 veterans were present at our first TMVC meeting. We’ve never had that many before.”

Thanks to the generous support of the Nevada Military Support Alliance, the VRC has established a successful Mentor program and Leadership Academy. These important programs have been an important expansion of the Center since it first opened in 2014.

The VRC opened in 2014, as a result of the combined efforts of Totans, with then VA Certifying Official, Roberta Bickford, a Veterans Advisory Committee, Veterans Upward Bound, TMVC, Veterans Integration to Academic Leadership (VITAL), and the staff and students of TMCC. The Grand Opening ceremony was held on April 9, 2014.

Veteran enrollment has steadily increased from 416 in Fall Semester 2012 to about 650 currently studying at TMCC. The VRC is open from 8 a.m.-7 p.m. Mondays through Thursdays, and 8 a.m.-4 p.m. on Fridays.

“The computer lab has six new computers where student veterans can print for free or study all day,” Totans said. “The briefing room has a white board and long table. They can reserve it for study groups to work on math problems or class projects.”

During active duty, veterans followed structured orders, and they also taught and mentored each other.

As veterans adapt to civilian and college life, they must handle independently many multi-faceted tasks originating from different sources. Veteran students need to suddenly master a great deal of computer-based input, and juggle open-ended assignments without the daily briefings that are a usual and customary part of the military schedule. The VRC is a place where they may transition smoothly with the support and camaraderie of their peers.

“In the new space, there’s more of a quiet area to study—they can close the door and study without interruptions and really focus on their academics,” Totans said.

The Nevada Military Support Alliance has helped the VRC establish a Mentor program and the Veterans Leadership Academy. About 52 student veterans or their dependents using benefits are now enrolled in the Veterans Mentor Program. These students commit to a one-year program which consists of attending three veteran workshops of their choice and staying in contact with one of TMCC’s staff mentors.

Mentors for 2016-2017 include Pentecost at the Dandini Campus and two additional staff members:

Student veterans receive a book stipend at the TMCC Bookstore for each semester they participate in the program.

The Veteran Leadership Academy (VLA) is a group of 10 student veterans who are dedicated to serving both college and community.

They will soon be deciding where to focus their efforts for this academic year. Last year, the group concentrated on community service; specifically community cleanup and also assisting the Disabled American Veterans (DAV). VLA members meet as a group once every two weeks.

TMCC’s Career Center, together with the VRC are presenting a Veterans Job and Resource Fair on Friday, Nov. 4. from 11 a.m.-2 p.m. in the V. James Eardley Student Center.

Employers and community agencies are currently registering to host tables at the upcoming Fair. Veterans at TMCC and in the community are invited to attend the event and meet with local employers and resource organizations.

For more information about the Veterans Job and Resource Fair, contact the Career Center or the VRC.