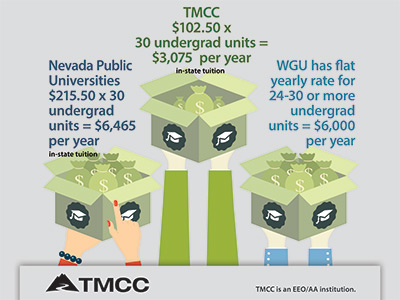 Tuition and fees for public colleges and universities are established by the Nevada System of Higher Education (NSHE) Board of Regents.

Undergraduate tuition rates for Fall and Spring Semesters per credit unit are as follows for Fall 2017:

Western Undergraduate Exchange (WUE) is a tuition discount offered at public institutions to students from neighboring states in the West. To apply, contact Admissions and Records at 775-673-7042.

Parking at TMCC is free, saving up to $400 per year from the cost of parking in a university parking garage, according to students.

The new parking lot on the northeast side of Dandini Campus is accessed from Campus Loop Road, or lots I and G. This new lot was paid for with existing capital improvement funds, and students did not pay any additional fees for the lot’s construction, said Dave Roberts, Executive Director of Facilities Operations and Capital Planning at TMCC.

There is a Significant Return on Investment for College

The Pew Research Center published a study in 2014 that found the income gap is widening between those who have a high school diploma only and those who are college graduates. The report is titled, "The Rising Cost of Not Going to College". The study found that earnings for high school-only graduates in comparison to college graduates have fallen with each generation since the silent generation and baby boomers.

Pew reports that Millennials ages 25–32 with a two-year degree or some college credits earned $30,000 median income in the U.S. for full-time work, in 2012 dollars, as opposed to $28,000 for those with a high school diploma and no college credits.

They also reported the unemployment rate for this population group was 8.1 percent for those with a two-year degree or some college, compared to 12.2 percent for high school graduates with no college credits.

The U.S. Bureau of Labor Statistics (BLS) posts comparisons for weekly earnings by educational level. The BLS reports that associate degree wage-earners age 25 and up averaged $819 per week in 2016, while high school graduates earned about $692 a week. Those with less than a high school diploma earned about $504 per week.

The agency also posts that the unemployment rate for those with an associate degree was 3.6 percent in 2016, while workers with a high school diploma experienced a 5.2 percent unemployment rate.

For more information about assistance with college costs at TMCC, please contact the Financial Aid, Scholarships and Student Employment Office.