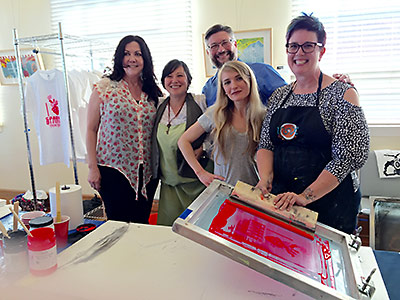 The T-shirt screen-printing mesh was covered in hot pink and black ink, being folded up and down in rapid motion.

It was muscle-powered, not steam-powered — although seeing finely embellished locomotive artwork conveyed the steampunk theme of this event to attendees. Steampunk is a popular science fiction genre where America's Wild West combines with the look of Victorian England to generate a creative and immersive setting.

Students Veronica Chapman, Tandy Gach and Haley Williams volunteered with screen printing, assisting their instructor mentor Candace Garlock, TMCC Art Galleries Curator, who is on the board of directors for the Museum. Their designs were inspired by the “From Steam to Steampunk” exhibit now on display at the Museum.

“I volunteer at the Sparks Museum already and I really like the people I work with — it’s fun,” Gach said. “I like the whole process of design; bringing artists together to create projects and building on each other’s ideas to produce something great.”

Gach and fellow students designed and drew artwork for the event on their own time, out of class. Williams, who illustrated an intricate steampunk themed “I love Sparks Heritage Museum” design also thought it would be fun.

“It’s a small museum and I wanted to help bring attention to it,” she said.

Chapman created a detailed pen, ink and marker drawing that was used in a swag box given to contributors for the Museum’s “One of 300” endowment campaign kick-off. The drawing in the box is a card-size limited edition print of Chapman’s larger canvas.

“I jumped on board and volunteered,” she said. “I created a 19-inch x 24-inch drawing and they’ll be able to auction that off later this year at a steampunk benefit party.”

Chapman’s T-shirt design was railroad-themed, representing the heritage of Sparks, the Rail City. Sparks’ nickname originates from the time when the tiny town grew rapidly after the Southern Pacific Railroad built a switch yard and maintenance facility there in 1904.

“The railroad tracks of the design are in the shape of a number eight, the Southern Pacific locomotive Number 8,” Chapman said. “I did a lot of research on it when I was drawing it.”

TMCC staff and students helping with the event include the following:

John Palmore, an original member of the Drifters, also donated his time providing music at the Building Steam Fundraiser.

“It’s a fun event and a worthy cause,” he said. “What I like best is to play and sing.”

“When we started the campaign to raise money for the endowment fund, a donor offered to match contributions through the end of the year up to $10,000,” she said. “We thought this event would be a fun kick-off to the campaign.”

The museum supporter and major donor who is matching contributions is Sparks resident Charles Steiner.

The Sparks Museum Endowment Fund is set up so that the principle raised will never be touched and it’s interest will go to the museum’s operating expenses in its mission to preserve Sparks’ heritage, she added. The first 300 people to donate $35 or more will receive the swag box.

“We couldn’t have done it without TMCC’s support,” Reis said. “The graphic students’ designs are amazing.”

Future Plans of the Artists

Gach is continuing her graphic design studies in the Fall semester. Williams has landed a job already and is working while she completes her degree.

“I work for a media group and I hope to continue working in the graphic design field,” Williams said.

Chapman is enthusiastic about both graphic design and fine art and would like to work in both areas.

“Illustration is very fulfilling for me,” she said. “I’d love to be able to do comic books. It’s amazing what happens when you start going to college, a lot of horizons open up.”

Garlock has artwork displayed at the Museum, is on the board of directors and is chair of its fundraising committee.

Where do they find all this energy? They are steampunk-powered, no doubt.

For information about the Sparks Museum and Cultural Center, please contact Kelly Reis at 775-355-1144, and for more about Visual Arts and Graphic Communications at TMCC, call Scottie Lockrem at 775-673-7291.