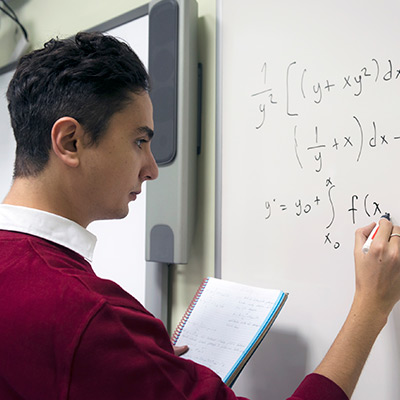 Both the data and recent comments from students confirm that those who take their English and math core classes first are experiencing more and easier success with later courses.

Students also add that smaller class sizes and the cost-effective tuition rate at a community college helped them to be more successful in completing their core classes.

“We hear from students who were grateful they took these classes sooner rather than later,” said Natalie Brown, PhD, Director of Academic Advisement, Transfer Center and International Student Advising Services at Truckee Meadows Community College.

Shelly Zamorano, a TMCC student, took core English early in her program at TMCC and is now close to finishing her degree.

"It was good to take English core classes in my first couple of semesters at TMCC, because I gained writing skills that helped me with my papers for other classes and made the later papers smoother and easier to plan out and finish," she said.

TMCC alumnus, Quest Vankirk agrees, and adds that he was happy with his decision to take math and physical science classes at TMCC, rather than at a four-year university.

“The calculus and physics classes were much smaller and the professors were personable," Vankirk said. “Specifically, Dan Loranz and Kurt Ehlers were the two best teachers I've ever encountered. They both have a knack for making sure all of their students are understanding the material.”

The Task Force analyzed data from the student group, or cohort, starting their studies in Fall Semester 2007. Committee members looked at core math requirements, sometimes called gateway math. For some degrees, Math 120 is the core course, and for other degrees—many science and technology-based curriculums—Math 126 is considered the gateway.

“I know those classes aren't necessarily the classes students are most excited about taking, but there are so many benefits to getting them completed early on,” she said. “First of all, the majority of classes at TMCC include math and/or English as prerequisites, so by not completing them early, students are limiting their options for classes to take. Especially for students seeking degrees in the STEM fields, so many classes depend on successful completion and progression through math. If students put that off, it can add time to degree completion while the student takes the math needed to begin taking classes in their degree field.”

“STEM students who complete their early math and science coursework under Professors Loranz and Ehlers do much better later on than students who start in larger classes at universities,” Vankirk said. “Over a dozen of their students I know who went on to transfer to UNR became Silver Scholars."

He added that there is a cost benefit of attending core classes at a community college.

"Not only do we have a better springboard into upper-level engineering and physics courses than the universities can offer, we have them at a third the price," Vankirk said.

Writing skills and thesis statement development learned in English core classes can also benefit students with later coursework that may be more technical or apply to their major.

“Students will be using the skills they learn in these classes throughout their time at TMCC — by gaining the math and writing skills early on, students will be more successful in the classes they take down the road. They will also have more options for classes in each general education category and will be able to progress faster through to degree completion,” Brown said.