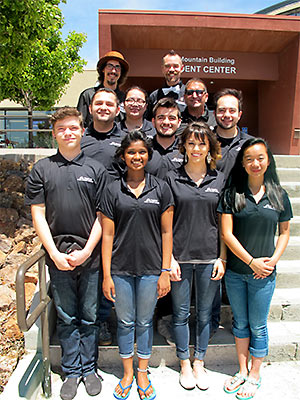 “TMCC is a great place to be, and there are a lot of opportunities here,” said Se’Leah Rushing, new Student Government Association (SGA) 2016-2017 Business Division Senator at Truckee Meadows Community College.

Opportunities include leadership, friendship and networking, according to many SGA members, including Mailynn Santacruz, Secretary.

“I realized how connected we are — the SGA has to represent the student body to make sure the students are heard,” she said.

The new senators and officers were officially installed and began their positions on May 13, Transition Day. On that day, the outgoing and incoming senators and officers gathered in the SGA Office, Red Mountain Building, room 122, participating in activities and games and getting to know each other.

“We learned about the constitution, by-laws and operations manual,” Rushing said. “I could ask the previous Business Division Senator questions about the position, any tips he had, things he’s learned and about the people I need to meet.”

SGA increased participation to record numbers during the Spring 2016 election, with 339 total participating voters — up more than 50 from the 2015 election.

The new SGA senators and officers at TMCC are the following:

Students find the SGA through other students, a growing network

Santacruz, sophomore and new SGA Secretary, is thinking about a major in computer science.

“One of my friends wanted to join the International Club and Phi Theta Kappa, and I found out that SGA sponsors many of the clubs,” Santacruz said. “I peeked in on a Wednesday SGA meeting and it was a little formal. They were all dressed up, but then I found out they were interviewing for the Science Senator position. So, I sat down and listened.”

Interested, she started to attend the regular Wednesday meetings.

“Then I helped with a blood drive, signing people in — it was a two-day event,” she said. “I worked as a high school liaison and it became the official unpaid position representing TMCC High School students.”

“Last Fall, I stopped by where SGA was running a booth and taking a survey,” she said. “Then a friend and I wanted to start a club, the Christian Outreach Club, and I got to know even more about SGA.”

Rushing soon became interested in many of their activities, helping out with the Diversity Festival, Wellness Week, the blood drives, club fairs and attending the Wednesday weekly meetings. She decided to run for office.

From Santacruz’s involvement grew a deeper commitment and she decided to run for elected office.

“I decided to run for Secretary because it’s a role helping the other officers,” she said.

Originally, there were two other people running for the position of SGA Secretary. Santacruz developed her election plan and scoured the house for left-over snack bags and change to help with her campaign.

“My strategy was to have my face recognizable on campus, so I handed out snacks and fliers promoting voting in general,” she said. “I participated in the debate and candidate fair events.”

The other two candidates for SGA Secretary needed to drop out of the race due to work or personal reasons. Santacruz remained and was elected to the office. Her vision for the upcoming academic year is to spread awareness that there is a warm reception for students at TMCC and in SGA activities.

“I want students to participate as much as possible in clubs and activities,” she said. “I want them to feel welcome even if they commute, and also be able to bring their children or family to events.”

“I want to be a bridge between the community, TMCC High School and the College,” she said. “I really want to help emphasize the business programs here; there are so many and you can now even get a Bachelor of Applied Science in Logistics Operations Management here.”