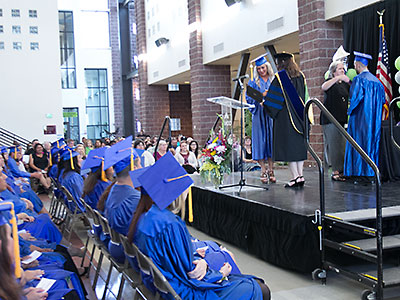 Racquele LeBard and Salvador Tapia on stage at the HSE Graduation Ceremony at Truckee Meadows Community College in June.

The voices are a unison chorus.

High School Equivalency (HSE) graduates preparing to robe up for their ceremony chime in that the decision to go back to school was by far the hardest step in their journey to finally cross the stage — where 63 walked proudly at Truckee Meadows Community College on Friday, June 24.

Racquele LeBard, nicknamed “Rocky” said that she hadn’t been interested in school when she was a teen and didn’t know how to stack numbers upon entering the High School Equivalency Preparation Program.

She noted that the supportive environment made it easy once she started her math studies.

“I would say that the program made it flawless, the schedules were flexible,” LeBard said. “It was just about making a commitment and going to class.”

She worked in retail management and also was a professional skydiver.

“Because of that, I became interested in aviation and I want to get a pilot’s license,” LeBard said. “You need a G.E.D. as a stepping stone and a private pilot’s license before the commercial pilot’s license which requires a bachelor’s degree. I’d like to be a pilot for the forestry service.”

She might also consider starting her own business. One factor that made the HSE preparation straightforward for her was that pre-test scores are categorized.

“The way that Gain scores were broken down, you could see what you’re missing in English and math,” LeBard said. “It shows where your strengths and weaknesses are so you know where you’re strong and the chapters you need to study or spend more time on. This and the great teachers really kept me going.”

Shaniece Hughes gets up at 3:30 a.m. on workdays to get her family ready for her to go to her maintenance job at a local casino. Concerning the HSE exam, she said it's about the first step.

“Do it, don’t be scared,” she said. “The scariest thing is actually just making the decision to do it. I was very surprised at how easy it was,” Hughes said. “I’m 33 and haven’t been to school in a long time. I found out that I'm smarter than I thought.”

She said that receiving her diploma is life-changing.

Salvador Tapia agrees. Also a parent with two sons and a daughter, he decided to go back to school upon seeing his older son do well in college — even though it was daunting to return to the classroom after being away for so long.

“Just the fear of going back after all these years … of being back in a school environment,” he said. “You can’t live your life being afraid of failure. I have a very supportive wife and she said ‘You never know until you take the test.’”

Tapia’s aspiration to set an example for his younger children was the deciding factor.

“I want to try to excel for my family,” Tapia said. “I have three children and one is already successful in college. I’d like to show my younger son that education is important. You can do it on your own timetable in life.”

Graduates give high marks to their advisors and instructors

“Cyndi Jakus was a great career advisor,” LeBard said. “Rain Donohue communicated where I needed to be and the forms to fill out. Cypress Barrows was helpful with that, as well.”

Paula Kizis helped Hughes and let her know everything she needed to find out about the HSE preparation.

Grads say that instructors and tutors were supportive and approachable.

“Linda Schneider-Erger was an excellent math teacher,” LeBard said. “There are some teachers that lecture and some that teach. She gave me a great foundation in everything from fractions to trigonometry. She made sure everyone got it before continuing on. She was sweet, attentive and very thorough. James Lewis was my language arts instructor. He was fantastic in inspiring people to push themselves. He encouraged me to test, saying ‘you’ve got this.’ I tested a month-and-a-half early and passed.”

“Peter Kendrick is an awesome teacher — he made math fun and enjoyable,” she said.

The flexible schedule offered by tutors was also noted by grads.

“Paula, the tutoring manager at Meadowood made sure my tutoring schedule was fitting with my work schedule and would find a tutor to fit my needs, even with short notice,” LeBard said. “JoAnn Russell was such an amazing tutor. On days when I just wasn’t getting it, she’d find a way to get the concepts to stick.”

“My wonderful tutors were the best math tutors I’ve ever witnessed in my life,” Hughes said. “Their names are Yesenia and Maribel. They can fit around anyone’s schedule. They find the individual needs of the students and start them from where they are.”

“I love math, so I’m thinking about a bachelor’s in general studies or math at UNR,” LeBard said. “I’m going to start in the Fall; getting my Associate of Science at TMCC for sure, and then transfer to a bachelor’s program.”

Tapia would like to achieve career goals, very possibly in the company where he currently works.

“I have the option to try to move up in my company and continue my education at TMCC,” Tapia said. “I might also take advantage of the diesel technology program.”

Grads say “Just do it”

“Just do it,” LeBard said. “It’s a stepping stone toward limitless possibilities in your future. Don’t put it off, just do it. I wish I would have done it sooner. It’s painless, and everyone is supportive. You won’t be sorry that you did it.”

“Making the time to go to school is a big challenge, but don’t talk yourself out of it,” Tapia said. “You just have to make it happen. Life is going to throw you curve balls and so you’ve got to make the most of your opportunities.”