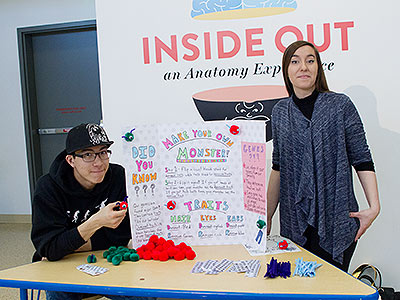 Daniel Nguyen and Hannah Little led a coin flipping game for children to see which feature they would glue onto their pipe cleaner craft monster.

Children who visited the Terry Lee Wells Nevada Discovery Museum on Saturday, April 16 were treated to some fun hands-on lessons in Mendelian genetics, led by groups of students from Truckee Meadows Community College.

“My favorite part of this activity is interacting with the children,” said Aries Shelley, anthropology student. “It’s nice to see them light up when they learn something new.”

The class members participating in the service learning assignment were from the course Anthropology 102: Introduction to Physical Anthropology, taught by Christine Boston, PhD, Instructor at TMCC.

Earlier in the semester, each of the students created an interactive presentation or game, and showed it to the full class. Everyone voted on what they thought were the most instructional and fun activities.

“Four were chosen, and we divided the class into groups, or teams,” Boston said. “The creator of the winning activities taught it to each person in their group who would work with children at the Museum,” Boston said.

One of the hands-on lessons involved kids rolling dice to find a color corresponding to numbers generated by the roll. They then colored in different parts of their unique alien creature according to the roll of the dice. In another game, kids flipped a coin to see which feature they would glue onto their small monster; a toy figurine made with pipe cleaners and other craft materials. One of the games was a memory game, and another was a colorful table game where kids moved their marker along a path based on possible genetic combinations.

“It’s all about chance when you learn about genetics,” said Heather Lindenberg, anthropology student. “You never totally know what genetic feature will be expressed.”

Her class colleague, Esmeralda Pantoja saw the service learning project as contributing to her career path.

“I like being able to teach a concept to a child,” Pantoja said. “It will help me in my future professional field of psychology, because you interact with people. It helps to practice teaching because I’ll be explaining concepts that will help people in their lives.”

About 12 students participated in the presentation of the service learning project from 11 a.m.-2 p.m. at the Museum. Television station KRNV Channel 4 covered the event. Other class members who could not attend on April 16 did an alternate homework assignment.

For more information about anthropology classes at TMCC, please call 775-673-7185.