Antarctic Adventurer to Give Presentation 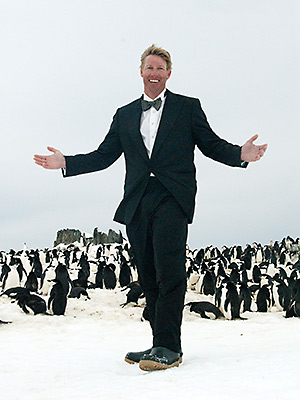 Douglas Stoup has skied to the North and South Poles more times than anyone on earth, and he will soon be taking the trek to Truckee Meadows Community College.

All proceeds will be donated to Ice Axe Expeditions, a tour agency that leads journeys to some of the most remote places on the planet. Stoup has also founded a nonprofit organization, Ice Axe Foundation, which partners with schools and research groups to bring students interactive learning experiences with adventurer visits and expedition scenes by satellite feed.

“I love pushing the limits of human endurance—and really one step further—what your body and what man can do,” Stoup said in the film "Ice Cold Gold". “I’m a skier at heart. I certainly love the ice and love the cold. I do ski mountaineering all over the world 200 days a year, but I’m really known for my North and South Pole expeditions.”

No journey seems too long or ambitious for Stoup.

“Whether it’s a huge expedition from the coast to the Pole or a complete crossing, it’s really a test of human endurance and survival skills,” he said in the film.

Stoup supports the work of climate science researchers by reporting direct observations and measurements from his polar trips, and by creating new types of equipment that further their studies.

He spoke to engineering students at Stanford University as a 2012 seminar series guest. In the presentation, he talked about seeing recessing glaciers in Greenland and in Europe. He has witnessed warming water temperatures, and seen changes in krill populations. All the sea life and birds eat the krill, he said.

“There’s about seven glaciers (Antarctica) that are calving at an alarming rate … There’s huge tabular icebergs that are just calving off,” he said during the lecture.

He has helped scientists by inventing equipment that helps when gathering data in cold places. One example is a type of polar beacon that tracks environmental changes. He has designed an ice bike that can be used to travel over snow in Antarctica faster than travelling by skiing.

“Because his experiences are extraordinary and rare, he can really speak with a unique viewpoint,” said Dianne Cheseldine, Founder of the Distinguished Speaker Series and TMCC Professor Emerita. “We’ve all read about climate change, but he’s been there and seen it with his own eyes.”

“He raises funds for charities and he has even taken a blind traveler on one of his expeditions, so he has heart as well as incredible endurance skills,” she said.

One example of Stoup’s work is "Top of the World for Charity". He was the expedition guide for a group of Canadian businessmen in 2006 to the geographic North Pole to raise as much money as they could for children’s charities. They successfully completed the trip and collected $500,000 for local organizations.

In August, Cheseldine and a friend went to Lake Tahoe for a relaxing day at Kings Beach. There happened to be an event going on there, the Ta-Hoe Nalu Paddle Festival.

A restaurant vendor noticed Stoup—celebrity to skiers and paddleboarders—and asked the two ladies, “Do you know who that is?” By the time he filled in Cheseldine on all of the details, Stoup had passed by. But when he returned, Cheseldine’s friend waved and called out, asking him if he would please join them where they were sitting in their beach chairs under a tree.

“He was there with his adopted son,” she said. “He’s very approachable and warm.”

So, she told him all about the Distinguished Speaker Series (DSS) at TMCC and they exchanged business cards. Stoup and his wife also attended a DSS event earlier this year and met the October speaker, Dr. Jorge Victor Gavilondo.