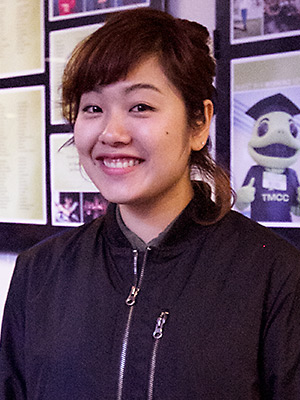 Ayaka Kimura is an international student from Japan, working on her Associate of Arts degree at TMCC.

With the start of a new year, many people think about making resolutions to get more in shape.

Cheryl Olson, Project Director of Technical Sciences at Truckee Meadows Community College, has been thinking about staying fit for many years and helping others to do so as well.

She has been volunteering for 20-plus years with Reno Wheelmen, a nonprofit cycling advocacy group established in 1896. Olson helps at racing events as a course marshal or registering entrants. She also volunteers at events that promote different types of cycling or cyclists. One example is raising awareness for Bike Like a Girl, an organization that encourages and supports women in bicycling.

In addition to the Wheelmen, Olson is also a member of the Truckee Meadows Bike Advisory Committee with Washoe County, a volunteer committee for bicycle advocacy and improving quality of life in the Truckee Meadows. It is a group of about 10 community members and meets once a month to brainstorm ways to make Reno more bike-friendly, among other cycling topics. She participates in a sub-committee that leads the Commuter Challenge during Bike to Work Week each May.

This year’s event will take place from May 14–20. The Challenge promotes both a healthy and active lifestyle, and achieving better air quality in the Truckee Meadows.

“I enjoy helping others experience the joys of cycling, and promote cycling as part of a healthy lifestyle and community,” Olson said.

Political Science Professor Fred Lokken has been quoted almost daily in newspapers and television as a well-regarded expert in elections, caucuses and state politics. The Nevada Appeal calls him one of the two premier analysts in the state.

“But both men (Lokken and Eric Herzik), two of Nevada’s premier political analysts, say hopefully, things will start to get clearer, to make more sense, once the supporters begin backing candidates in February,” wrote reporter Geoff Dornan in a Jan. 10 article on nevadaappeal.com.

In addition to the Nevada Appeal, Lokken has recently been featured as a political analyst in media outlets including:

And his presence representing TMCC does not stop in the printed and online media. His participation in community events is magnified during an important election year.

“I will be doing a presentation to the Northern Nevada Network, Ty Cobb’s group, on the 2016 election – both national and state,” Lokken said. “On Feb. 6, I’ll be a judge for the state’s ‘We the People’ competition in Las Vegas. This is my seventh time as a state judge, and I’ve been a district judge for District 2 for the past 15 years.”

We the People is a contest that tests high school students in how well they relate current events with principles in the U.S. Constitution, and their mastery of government and democracy curriculum developed by the State Bar of Nevada Law Related Education Department.

One would think that Professor Lokken’s time was completely filled up. But, there is also his involvement in online learning and other topics on quality in higher education, including for the Instructional Technology Council (ITC), and the State Authorization Reciprocity Agreement (SARA). SARA is a group for member states and higher-ed institutions to establish national standards of practice for college-level online education, and to create greater accessibility for students who take courses based at a college in a different state from where they reside.

Lokken will also be a featured debater on the topic of analytics at the ITC annual conference in Phoenix, Ariz. in February.

Governor Brian Sandoval has appointed Lokken to a higher education commission comprised of 15 western states and the Commonwealth of the Northern Marianas Islands. The Western Interstate Commission for Higher Education (WICHE) is one of four U.S. compacts of cooperating states and territories, organized to support colleges and universities.

There is more, including presentations at the Osher Lifelong Learning Institute and at the American Association of University Women (AAUW) in Incline Village, but there is only so much space on the World Wide Web to write about all of Professor Lokken’s many endeavors.

Ayaka Kimura, student and intrepid traveler who is proud to attend TMCC

Ayaka Kimura is an international student from Japan, working on her Associate of Arts degree at TMCC. She will graduate in May and then plans to return to Japan to find a job as a translator at the 2020 Olympic Games in Tokyo before returning to school for her bachelor’s degree. She’d like to study in Canada, and so she’s now taking French class.

Kimura, an adventurous traveler, spent the winter break exploring both coasts of the U.S. – from San Diego to Portland, OR to Charleston, SC.

“I understand everything better now,” she said about Charleston’s history during the Civil War.

But the climate and culture were new for her.

“Christmas was really warm there, it’s almost not like a usual Christmas,” Kimura said. “I was also surprised that every house was decorated and everyone put up a brightly lit tree.”

She spent time with extended family and friends in Charleston, and also in San Diego, Long Beach, and San Francisco. Traveling inland, she visited Napa to go wine-tasting for the very first time. She also said that she was very impressed with the efficient and inexpensive transportation system in Portland.

“It was nice to spend time with my roommate there, because we have to say goodbye when we graduate in May and I return to Japan,” she said.

Kimura said that she is proud to attend TMCC.

“TMCC’s faculty is so good,” she said. “Faculty and friends, everyone here is so great; and if I’m worried about something...when I’m quiet, they ask me ‘what’s going on?’ and they give me ideas for things I can do.”

“I’d like everyone to know SGA is a great experience and I recommend it,” she said.

Additional contributions for good news are welcome. If you have an achievement, volunteer experience or award to share with the TMCC community, please let us know.