Scientist, Photographer from Cuba to Speak at TMCC 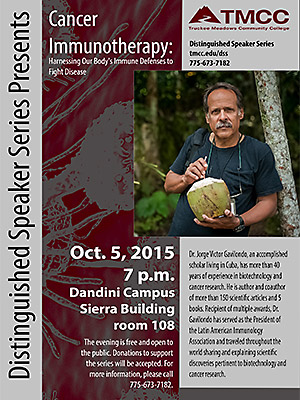 Jorge Victor Gavilondo, Ph.D., will give presentations at TMCC on Oct. 5. Click on image to enlarge.

“Cancer Immunotherapy: Harnessing Our Body’s Immune Defenses to Fight Disease” is the title of the second in the Distinguished Speaker Series talks this year and takes place on Oct. 5.

Gavilondo has more than 40 years of experience in biotechnology and cancer research. He has written or coauthored more than 150 scientific articles and five books.

Gavilondo has served as the President of the Latin American Association of Immunology and traveled throughout the world describing scientific discoveries in biotechnology and cancer research.

“Being personally involved in cancer basic and applied research for 44 years is one of the most rewarding experiences in my life,” Gavilondo said.

Cancer is the leading cause of death in age groups between 40 and 79 years old, and the second or third for people of other ages, he said. It is the quest of scientists to destroy tumors while not affecting surrounding healthy tissue. One way to accomplish this is through new and leading edge research about the body’s own resources to fight the disease.

“The idea of specifically boosting the immune system of cancer patients to achieve the control of the disease is an ambitious but worthwhile scientific work,” Gavilondo said. “These kinds of selectively targeted biological treatments have been under intense investigation in Cuba for many years, being the national groups that I have led or worked in the most important in the field. Any advances in this area of research, no matter how modest or small, are crucial for mankind.”

Gavilondo is a respected photographer

In addition to his work in the field of medicine, Gavilondo is also a respected photographer who has presented his artistic images at national and international events. He has balanced his career as a scientist and artist for 30 years.

His photographic portfolios of Cuba are included in two dozen private art collections in Cuba, the U.S., Mexico, Spain, Portugal, Italy, France, Germany and the United Kingdom. Gavilondo currently teaches photography, and his first textbook on digital photography will be published later in 2015.

He will teach as an artist in residence at TMCC, working with fine art photography students from Sept. 28-Oct. 4. One of the activities planned is a trip to the Black Rock Desert with advanced students to do an on-location photoshoot.

His talk, “Digital Photography: Technology Update” will present advances in digital photography and he will show his images of Havana. The collection of 24 photographic prints will also be donated to TMCC’s permanent collection.

“I met him in January when I was on a workshop with Santa Fe Photography workshops,” Cheseldine said. “He is now their coordinator for the workshops in Cuba. So he certainly embodies the two disciplines of science and art. I remember I liked his photography and then his son played classical piano for our final class photography show and I thought ‘what a cultured family.’”

Gavilondo will also accompany Cheseldine to a TMCC outreach event at Coral Academy of Science charter school in Reno. They will meet with 9-12 grade science, art and AP students to promote programs at the College.

A scientist and artist gives thoughts on nature

“Personally, I am a nature lover, and my photography work on birds, and Cuba's rural communities, are examples of this,” Gavilondo said. “Cuba has done a good job in defining several of the largest biosphere reserves in the Caribbean, and has taken special care of reforestation. However, it is well understood that the work done is still insufficient and many nature lovers, and government preservation agencies and groups are very active now in the country.”

Gaviolondo said that tourism to Cuba is good for the economy, but raises ecological concerns.

“Tourism in Cuba has grown tremendously in the last 20 years, with close to 4 million visitors are expected in 2015,” he said. “This reality, while good for the economy, could eventually lead to ecological and nature disasters.”

He would like his work to contribute to the conversation about nature in his home country.

“The need to boost scientific information and education towards conservation to preserve our patrimony is, though, an important task for individuals, nature-conscientious groups, and scientific and tourism government institutions. I feel part of this important task,” he said.

For more information about the Distinguished Speaker Series, please call the automated voicemail at 775-673-7217, or for a series representative 775-673-7182.