Audit May Be a Positive Option for Students 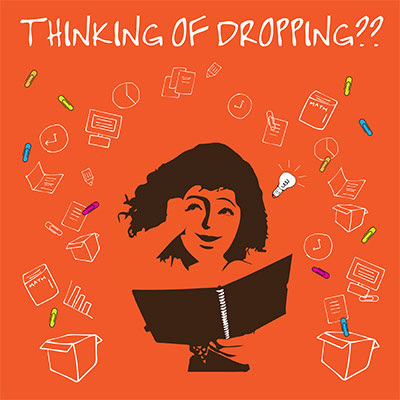 Artwork by Natsuki Tonuma, Junior Graphic Designer at TMCC. Tonuma is a student in the TMCC Graphic Communications Program.

During the middle of a semester, life sometimes happens to busy college students with jobs and family responsibilities in addition to their studies.

Unexpected job changes, sickness or stress can cause college students to withdraw from a class in order to avoid a failing grade on their transcript; but there are sometimes better options available.

The possibilities that are often not known or overlooked include getting more information from an instructor, seeking help from a peer tutor at the Tutoring and Learning Center (TLC) or changing the grade option to audit the class.

“Sometimes a student is doing better than they think in a class they’re worried about,” said Andy Hughes, Director of Admissions and Records.

He said most professors would rather have a student talk to them about their grade than to stop coming to class entirely.

“The best thing to do is to talk to your instructor to find out where you actually stand,” Hughes said. “Teachers appreciate students making the extra effort.”

Another helpful resource is TMCC's Tutoring and Learning Center (TLC). The TLC provides free assistance to students in many areas, including writing, math, science, languages, college study skills and economics.

Dorie Leftwich, a recent high school graduate, received tutoring during the summer for her Math 126 class as part of the Success First Summer Bridge Program.

"It was refreshing because some concepts were foggy, but the tutors helped me see what I was supposed to be doing," she said.

Leftwich did well in her course and enjoyed the experience so much that she now works as a math tutor in TMCC's TLC.

"Being a tutor is awesome and self-rewarding,” she said. “It helps for students to get a different perspective. It's a professional environment, but we have fun and joke around."

A TMCC student can change their option from credit with a letter grade, to audit with no letter grade, until midnight on Wed., Oct. 28.

To find the form:

"One professor had a microbiology student in class that was struggling," Hughes said. "The professor encouraged him to audit for the rest of the semester.”

The professor was John Adlish, PhD

“The student did audit the class and came back the next semester to take microbiology for an A,” Adlish said. “The student was then eligible to apply for the nursing program. It's a real success story."

Hughes said that it can be better for a student’s confidence to audit and stay in class rather than to withdraw.

“You’ve invested up to four weeks in the class already, done the work and paid for the class – which is time, effort and money,” Hughes said. “It’s to the student’s benefit to be exposed to the entire semester’s material to have a better chance of retaining the material and using it in future classes and in life. It could certainly help to receive a better grade the next time because the material will be familiar.”

Hughes said that auditing a class allows a student to keep forward momentum toward their eventual goals. It also allows students to be eligible for tutoring in the Tutoring and Learning Center.

“Choosing to audit helps you to continue to learn and grow as a person,” he said.

Auditing will not have an effect on a student’s grade point average (GPA), because the auditing option does not offer college credits.

“Audits look much better than withdrawals on transcripts when they are evaluated later,” Hughes said. “It shows the student has ‘grit,’ is a hard worker and could help later in applying for graduate studies.”

One caution for financial aid

If audits or withdrawal credits put the student over the 90-credit limit, they may not be eligible for financial aid after that point. Also, should a student change to all audit in one semester, a portion of the financial aid must be returned to the federal government and the student becomes responsible for that portion, said Sharon Wurm, Director of Financial Aid and Student Success.

Also, in the work-study program, a student has to be enrolled in at least six credits to qualify for work on campus.

“Auditing is better than withdrawing for many reasons – better than failing—but it’s not something you want to overuse,” Hughes said.

For more information on grading options and auditing a class, please call Admissions and Records at 775-673-7042.