The Musketeers Need A Fourth 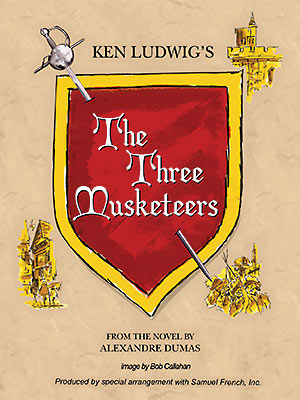 It appears that the three musketeers want you!

There are 22 adult roles available, and performers do not need to be a current TMCC student to take part in the auditions. The play is a comedic version of the classic story created by Alexandre Dumas. Rehearsals begin Aug. 24 and performances will be in the middle of October.

To participate in the audition, prepare a comedic one-minute monologue and be ready to read an unrehearsed selection. A movement routine will also be taught to those trying out for the play. The play is not a musical, and characters will not need to sing.

“This is a great period style play with a large cast,” said Carolyn Wray, Theater Professor. “Our students will be learning stage combat sword fighting from Joe Attack, the head of the Lake Tahoe Shakespeare Company and of the Good Luck Macbeth theater company. Male and female characters alike will sword fight.”

Yes, this is a story of intrigue, heroism, narrow escapes, swash and buckle.

Ludwig’s adaptation of the classic tale is a comedy

“Ken Ludwig is a contemporary playwright who has written comedies like ‘Lend Me A Tenor’ and ‘Moon Over Buffalo’,” Wray said. “His adaptation of ‘The Three Musketeers’ is a comedic adventure story in the style of the ‘Pirates of the Caribbean’ movie genre. There is quite a bit of stage combat and the action is very fast-paced.”

This modern adaptation lightens the mood of Dumas’ novel, penned in the mid-1800s.

Adventures of a young man in Dumas’ novel

Dumas set the original story in the 1600s, a time of political struggle between the monarchy and the Roman Catholic Church in France.

As the adventure begins, the lead character, young d’Artagnan travels to Paris in search of adventure. He hopes to join the Musketeers of the Guard, a fighting regiment of the king’s military.

Shortly after arriving in Paris, he bumps into the famous three musketeers: Athos, Porthos and Aramis.

The story thickens as he ventures to London to defend the honor of the Queen of France, encounters the fierce and dangerous Cardinal Richelieu and tangles with a beautiful spy, Milady, the Countess de Winter.

“The Three Musketeers” is a classic story that has endured for more than 150 years. Ludwig’s new comedic version also includes the appealing character of d’Artagnan’s sister Sabine, an archetypal tomboy. The modern adaptation has earned positive reviews by theater critics in England and the U.S.

"(A) slick, swashbuckling romp that cleverly updates the Dumas novel ... Ken Ludwig's new version of the story simply refreshes it, distilling its energy and strengthening its timeless appeal," as reviewed by The Guardian and posted on KenLudwig.com.

For more information about TMCC’s Fall production of “The Three Musketeers,” please contact TMCC Theater at 775-789-5671.