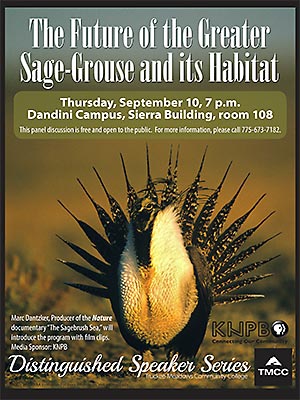 A four to seven pound bird—the Greater Sage-Grouse—is at the living, beating heart of debate about who is in charge of 2.8 million acres of Nevada. The topic comes to a highpoint in September when a decision will be made whether to keep this animal as a candidate on the federal Endangered Species List.

“The decision by U.S. Fish and Wildlife Service has the ability to affect agriculture, mining, commercial enterprises and recreation throughout the state,” said Thad Heater, Natural Resources Conservation Service State Wildlife Biologist for the U.S. Department of Agriculture.

First in the Distinguished Speaker Series at Truckee Meadows Community College this year is a presentation and panel discussion devoted to the Sage-Grouse, management of high desert rangeland and the Nevadans involved in many aspects of the issue. Information will be presented to the public from diverse viewpoints.

“The Future of the Greater Sage-Grouse and its Habitat” takes place at 7 p.m. on Thursday, Sept. 10, in Sierra Building, room 108, at the Dandini campus. The event features Marc Dantzker, Producer of the PBS Nature documentary, “The Sagebrush Sea.” Attendance is free and open to the public. Donations to support the series will be accepted.

KNPB Public Television is the media sponsor for this event.

The New York Times calls the effort to preserve the Greater Sage-Grouse, “One of the great conservation efforts of this century.”

The agenda for the program showcases film clips and an expert panel:

Most panelists are members of the Nevada Sagebrush Ecosystem Council

Governor Brian Sandoval established the Nevada Sagebrush Ecosystem Council (SEC) in November 2012. The bill, AB461 was approved during the 2013 legislative session to officially set up the council. There are nine members and six ex-officio members.

“The ecosystem program is focused on providing solutions and actions to the myriad of threats challenging the condition of the ecosystem and the plants, animals, and people dependent upon the health and resiliency of this landscape,” according to sagebrusheco.nv.gov.

The debate is underway this year

The U.S. Fish and Wildlife Service is under a court order to make a decision during September whether to keep the Sage-Grouse as a candidate for the Endangered Species List, or take it off entirely, Heater said. He added that the agency does not have the choice to officially list the bird on the Endangered Species List due to implications resulting from a budget rider on a congressional budget bill passed in December.

Diverse and typically opposing groups are working together to both conserve Greater Sage-Grouse habitat, because its official listing would have widespread impact on land use, according to the documentary “The Endangered West, Stewards of the Rangeland.” The groups collaborating represent agriculture, ranching, mining, conservation and recreation.

Recreation may be affected by seasonal closures regardless of the decision

There may be seasonal closures of public lands used for recreation whether the decision is made to keep the Greater Sage-Grouse as a candidate for the Endangered Species List, or taken completely off the list, Heater said. This is because there are land management policies by the BLM that are attempting to preserve the animal and keep the situation from becoming bad enough to require its official listing on the Endangered Species List.

Seasonal closures would occur during more sensitive times in the grouse’s life cycle, such as nesting.

Sagebrush is a hardy desert shrub and can live 140 years. It has deep roots and is fire resistant. Many animals and smaller plants depend on the long-lived sage for shelter and shade, according to "The Sagebrush Sea," PBS Nature documentary film. The Sage Grouse Initiative (SGI) notes there are more than 350 wildlife species on the range. The SGI is a partnership of ranchers, agencies, non-profit groups, colleges and others to promote wildlife conservation with sustainable ranching practices.

Nevada Sagebrush Ecosystem Council members and the BLM agree that invasive weeds and fire are the most pressing concerns affecting Sage-Grouse survival. Many also think that dividing the wide expanse of sagebrush into fragments with fencing is also a problem for the species.

“Unlike ravens and bluebirds, grouse are tied to unbroken expanses of sage,” relates the film. “Without it, the species would cease to exist. The Sagebrush Sparrow would also disappear. Each year, they return here to lay their eggs. They breed nowhere else. The Sage Thrasher and Brewers Sparrow do the same.”

Pronghorn antelope and mule deer rely primarily on sagebrush for their winter diet. Deer evolved in the mountains and can easily jump over obstacles like fencing. Antelope evolved on the valley floor and it is harder for them to leap fences.

Gas fields in mining operations have fragmented the sagebrush when holding tanks and roads are constructed.

An invasive plant species, Cheatgrass, is highly flammable and creates a problematic cycle when it is the first to grow following a fire. The Department of the Interior announced in August a national seed strategy to set up a network of seed suppliers who could quickly deliver native plant mixes to terrain damaged by fires. Ecologists will coordinate from the ground.

Latest reports show that the Sage-Grouse is starting to rebound. The Sage Grouse Initiative posted that the last count by the Western Association of Fish and Wildlife Agency showed 85,674 male Sage-Grouse on 3,559 breeding lek areas – up from 49,397 in 2013. But the report also stated that grouse populations have historically fluctuated widely from year to year.

Land use and conservation are complex, interrelated topics

“I think the Sage-Grouse issue is actually more about who is going to control the use of the lands of the West than it is about the bird,” said Demar Dahl, Elko County Commissioner, in the 2012 KNPB documentary “The Endangered West: Stewards of the Rangeland.”

On August 19, the Elko Daily Free Press posted a commentary by the American Exploration & Mining Association (AEMA) which stated concern about the Department of Interior land use plan amendments released in May. The organization writes that the plan is in opposition to a collaborative solution proposed by 11 western governors.

“The BLM’s outright rejection of the governors’ consistency review conclusively demonstrates that the Federal Government has no interest in listening to the voice of states,” writes the AEMA. “The result is the single greatest assault on multiple-use and access to federal public lands for recreation and economic growth from which Nevada may never recover.”

The Sage-Grouse is also trying to recover from losses of about half of the 500,000 square miles of habitat existing before human development on the sagebrush steppe.

“The Greater Sage-Grouse relies on the sage for everything and is found no place else,” according to pbs.org/wnet/nature. “But their numbers are in decline. Two hundred years ago, there were as many as 16 million sage grouse; today, there may be fewer than 200,000.”

For more information about the Distinguished Speaker Series, please call the automated voicemail at 775-673-7217, or for a series representative 775-673-7182.