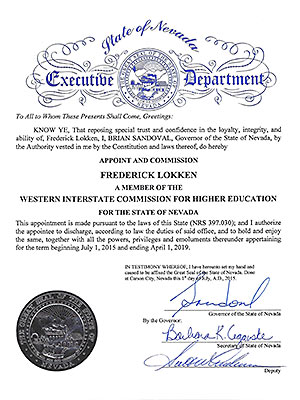 TMCC Professor Fred Lokken has been appointed by Governor Brian Sandoval to WICHE, an interstate higher education commission. Click on the image to enlarge.

Governor Brian Sandoval has appointed Fred Lokken, Political Science Professor at TMCC, to a higher education commission made up of selected state representatives from the Dakotas, across the west, to a U.S. island commonwealth in the Pacific.

The Western Interstate Commission for Higher Education (WICHE) is one of four U.S. compacts made up of cooperating states and territories, organized to support colleges and universities.

In addition to teaching at TMCC, Lokken is a frequent government and elections expert quoted in the Reno Gazette-Journal and local radio and television stations. He has recently been included as a guest commentator on the U.S. Senate race and elections in Nevada. He appears on Nevada Newsmakers, and guest co-hosts “It's Not Just Politics” with Ed Pearce on KOLO Channel 8.

“I’m honored to represent TMCC in this commission; WICHE was created by the western states in the 1950s and has an outstanding track record for fostering innovative and proactive solutions in support of higher education,” Lokken said.

Lokken has previous experience with projects sponsored by the commission.

“I’ve actually worked with various programs of WICHE since arriving in Nevada, so I have some familiarity with them,” Lokken said.

Students in Nevada are typically most familiar with the commission’s work establishing the Western Undergraduate Exchange (WUE).

“WICHE is known mostly for its exchanges (WUE), where someone from Nevada who would like to major in marine biology, for instance, for which there is no such program in Nevada, could go to another WICHE state and study there,” Lokken said. “Students from other WICHE states can attend Nevada institutions at a lower cost than full out-of-state tuition.”

WICHE is headquartered in Boulder, Colorado

“WICHE includes 15 states and the Northern Marianas Islands and was founded in 1952 to expand access to education, and to foster resource sharing and collaboration in higher education,” wrote Jere Mock, Vice President of Programs and Services, WICHE, in an email. “Our compact was signed by the governors of the member states and chartered by Congress.”

Three representatives appointed by the governor of each participating state and commonwealth serve on the commission and they meet twice a year. Smaller committees meet more frequently, sometimes by video conference. Commissioners are the policymaking body for WICHE, approving an annual work plan, budget and discussing initiatives that impact higher education.

Mock wrote that program and policy initiatives may include:

“Sometimes the issues are brought to the commission by the states themselves, and sometimes there is a sense from regional and national developments that some type of response is indicated,” Lokken said.

Information and resources are made available to institutional leaders, state policymakers and higher education system offices such as the Nevada System of Higher Education (NSHE).

“All told, I believe 46 states belong to one of the four U.S. compacts,” Lokken said. “Four eastern states have not joined, but often cooperate with their regional compact.”

Lokken will travel to an orientation session by WICHE staff

“I will be having an orientation from WICHE staff in a few weeks,” Lokken said. “We also have a Nevada WICHE which spearheads WICHE programs in Nevada. I am one of three Nevada commissioners.”

The State of Nevada WICHE has a more than $1 million budget directed to priorities of health education and recruitment of medical professionals, specifically mental health, and an increasing focus on workforce development needs, Lokken said.

He would also like to expand his role being active with projects related to distance education.

Lokken will be a speaker at the WICHE Cooperative for Educational Technologies (WCET) annual meeting in November. The conference takes place in Denver, Colorado. He will be on a panel examining federal regulations regarding distance education, based on his national expertise and published work in this area. Lokken is also a board member of the Instructional Technology Council (ITC), and chairs the Coalition of Affiliated Councils (COAC) of American Association of Community Colleges (AACC).