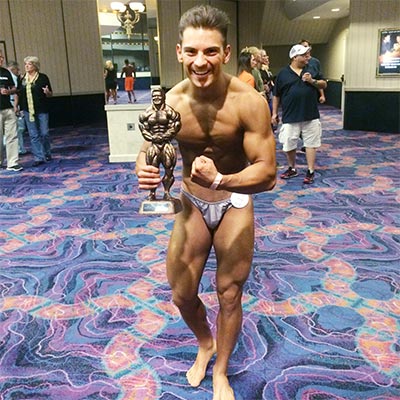 Ryan Chaump, alumnus of Truckee Meadows Community College, will eagerly tell you that lifting weights is serious business, and is also one of his favorite pursuits.

He greets visitors and members of the TMCC Fitness Center in the V. James Eardley Student Center with gusto, and his discernable passion for strength and fitness. Chaump has been a staff member since 2011.

“Owning a gym someday is my dream,” he said.

Chaump won a fourth place trophy in Bodybuilding, Middleweight Class at the NPC Best of the West Classic on Oct. 4, 2014. NPC stands for National Physique Committee, a national organization specializing in the sport of bodybuilding, fitness and physique.

“Since 1982, the top athletes in bodybuilding, fitness, figure, bikini and physique have started their careers in the NPC,” according to npcnewsonline.com. “Many of those athletes graduated to successful careers in the IFBB Professional League, a list that includes 24 Olympia and 38 Arnold Classic winners.”

The competition took place during the course of five days, and each day Chaump demonstrated lifts and poses for different muscular sets.

Back demonstrations such as:

He performed lifts, poses and routines to an audience averaging about 150-200 in the ballroom of JA Nugget Casino Resort in Sparks. Prejudging took place in the mornings, with contestants doing lifts and poses in front of the judges. In the evenings, entrants performed routines with music. Chaump picked “The Mortal Combat” theme song as one of his selections.

“You want to pick music that you can hit a major pose at a strong drumbeat during parts of the music,” Chaump said.

His trainer and good friend, Adam DeBoor, also entered the competition and won 1st place in the Light Heavyweight Class.

Training for the competition involved a strict diet and cardio exercises

Chaump trained for three months prior to the contest, and the pre-competition preparation involved lifting, cardio training and diet. Cardio is short for cardiovascular, and is a form of aerobic exercise that increases heartbeat and breathing rate.

Each day he practiced his lifts. Three to five times a week after lifting, he did a one-hour cardio workout of uphill treadmill walking or the stair climber.

“Diet was key,” Chaump said. “It was strictly greens, proteins and carbs before I lifted and after I lifted. For the rest of the day, I could have proteins, fats and greens. It was six meals a day of three food meals and three shake meals. The foods were mostly chicken, ground turkey, lean steak, some salmon, cream of wheat or rice, broccoli, natural peanut better, olive oil and avocados.”

He did not eat any sauces, ketchup or mustard, or drink alcohol with meals during the three-month training period.

“I keep it up and stick to the diet, but I add back in more carbs,” he said. “Maybe a little cheating and have a pizza once a month, or once every two months.”

He would like to open up his own gym after completing a B.A. degree

For more information about the TMCC Fitness Center or the Personal Trainer Preparation Program, please call 775-674-7974.