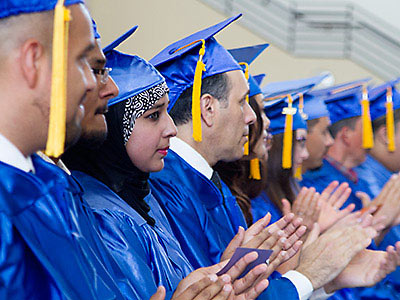 Sahrah Ashraf and fellow HSE Graduates participate in the June ceremony at TMCC in the V. James Eardley Student Center.

Sometimes when a person goes out of the way to help another, the giver unsuspectingly reaches some sparkling stars along that generous path.

This summer, new High School Equivalency Testing (HSE) graduates walked across the stage at Truckee Meadows Community College, having jumped over hurdles on the track to their focused goal: to contribute hope in their families or encourage fellow students. There were 92 grads in all, with 60 attending the ceremony.

The graduates are strongly driven to shout “never give up,” and they talk about this before describing any personal aspirations.

Maria Zambrano-Garcia, 2015 graduate, wanted to demonstrate for a young family member that a good education is important and reachable.

“Never quit – you have to keep going and you will get it,” she said. “It’s not only for you, it’s for the happiness of your family. I’m now a good example for my eight-year-old nephew.”

Zambrano-Garcia said that she also went back to school to show her parents that she could achieve her diploma. Her nephew is even more excited about school now after commencement, she said.

“My two big brothers were so happy for me,” Zambrano-Garcia said.

Fellow graduate, David Turner, became valedictorian with the highest HiSET examination score at TMCC this academic year. He spoke at the June 26 ceremony, repeating to a large audience gathered in the V. James Eardley Student Center, that it’s never too late...never too late.

“I don’t want others to give up and I’ve tried to keep encouraging my fellow students,” Turner said in a follow-up interview. “I tell them ‘just don’t give up.’ Not trying means you have no chance to succeed at what you’d really like to do. Even if you fail, it shows you what you need to do the next time.”

Zoheb and Sahrah Ashraf graduated at the June ceremony. Zoheb Ashraf credits his sister as his inspiration.

“I went through a surgery at the end of my senior year in high school and could not get all of my high school tests done on time,” he said. “Then I started coming to TMCC in summer school to push myself, and I promised myself that I will continue my education.”

“My sister, Sahrah, started studying for the HiSET because she did not go to school here, and she pushed herself to get her HiSET done,” Ashraf said. “That encouraged and motivated me because of the time she spent – it made me want to try as well, because I set up a goal that before the Fall semester starts I would get either my diploma or HiSET done. She helped me a lot so I could pass my test as well. Because of her help and support and motivation, I finally took my HiSET and passed all parts in the first time. I made my parents proud.”

At times, the going was strenuous, but not impossible for Zambrano-Garcia. She works a full-time day shift job. English is her second language, and she thought that would be a huge wall to scale.

“It was intense – it was hard,” she said. “If you don’t pass every paper, you think you can’t do it. But my parents encouraged me and told me I could do it.”

“Because I had no high school diploma, pay was low at my jobs,” Turner said. “Along the way, I couldn’t pay for an education. By chance, I met a business owner in person, not through a resume, and he liked me. He said I had leadership skills. It was a really good job but the company didn’t make it.”
Turner had wanted to go back to college for about 10 years.

“I kept hitting dead ends in southern Nevada, failing the G.E.D.,” Turner said. “They didn’t explain what areas needed to be improved and only gave numerical scores. I was only a number to them.”

Turner’s friends encouraged him to move to Reno, and he visited TMCC to find out more information about the High School Equivalency Exam (HiSET).

Graduates express appreciation for people who kept urging them on

“Everyone was extremely helpful,” Turner said. “People at TMCC were encouraging and helped me prepare for the exam. I was able to take all five subjects the same day with nearly perfect scores.”

Turner said that he felt supported by teachers who took a personal interest in his work.

“Paris Almond, my Art 101 and 102 teacher, encouraged and pushed me to explore areas of art that I’d never tried before,” Turner said. “Before, I sketched and used ink pen. She introduced me to new media, such as oil pastel, chalks and different types of papers that add more dimension and depth to my artwork.”

Zambrano-Garcia agrees that encouragement was key.

“The teachers are wonderful – Donna Kamen taught me English, Mahnoush Bagheri and Frank Suber were my math teachers, and James Lewis keeps encouraging you, pushing you,” she said. “He told us to ‘put your best into it.’”

Turner completed the HiSET with a high score, qualifying to register for a semester credit overload.

"I’ve been able to knock out 20 college credits for two semesters – 40 credits in one year at an average GPA of about 3.4,” he said. “Being told that ‘you can do this,’ and proving to yourself you can do this, really gives you tremendous momentum,” Turner said.

Turner is currently working toward an associate degree in astronomy with a minor in physics, and an associate of applied science in graphic communications. He plans to transfer to the University of Nevada, Reno to study astronomy, physics, quantum mechanics and mathematics, and is aiming for the level of PhD Turner would also like to use his skills in illustration to create visuals showing complex concepts in physical sciences.

Zambrano-Garcia said that the diploma will change her life in dramatic ways, from being part of a formal commencement ceremony, to for the first time, thinking a real career is attainable.

“My dream was to graduate at a ceremony like they have at high schools,” she said.

Program Coordinator Rain Donohue suggested to Zambrano-Garcia that she could think about a profession.

“Rain Donohue encouraged me to have a career,” she said. “I want to be a Kindergarten teacher.”

She has some words of advice for people thinking about high school equivalency classes and exams.

“You can do it no matter how old you are, or if you don’t know English yet – it’s never too late,” Zambrano-Garcia said.

“My personal message to everyone out there who did not graduate from high school or didn’t finish their high school diploma is that no matter what stops you, always try and never quit, because the “quit” word wasn’t for me or anyone,” Ashraf said.