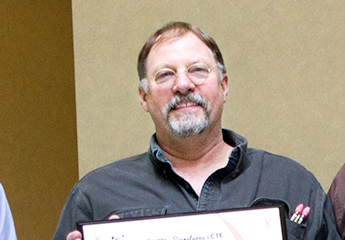 TMCC Graphic Communications Professor, and previous character layout artist for "The Simpsons" TV show, Brian Wells, has been named the 2017 Postsecondary Teacher of the Year by the Nevada Association for Career and Technical Education (NACTE).

The honor will be presented to Wells at NACTE Summer Conference that takes place from July 28-31 at Harvey’s Lake Tahoe Resort in Stateline, Nevada. Professor Wells has been teaching at Truckee Meadows Community College since 2007.

At last year’s annual conference, Wells gave a presentation about a sequence of professional development sessions he organized for Washoe County School District high school teachers in information and media technology. His efforts developing the training series illustrate some of the reasons he was chosen for this honor. The instructional series has now completed its second year.

The ACTE focuses on career education

The Association for Career and Technical Education (ACTE) is a national nonprofit organization that has as its mission to further career education. It is divided into five regional divisions, and some of the states in each division, such as Nevada, host their own chapter.

Nevada is part of Region Five, which comprises the 16 westernmost states, including Alaska and Hawaii. Wells will be considered for the regional award that is announced in March 2016.

Winners of the five regions will then be in the running for the national title.

CTE is a focused sequence of training

Career and Technical Education (CTE) is the preparation for specialized career fields.

“CTE is something that the nation is focusing on and part of TMCC’s mission,” Wells said. “We work on employability; for example, how well do you communicate and write? We work on helping students acquire skills specifically sought by an employer in a particular field.”

The professional development series that Wells began provides specialized training for teachers who, in turn, teach these detailed skills at academies to students who may subsequently learn on the job, or attend a career or college program after high school graduation.

“There is a measurable result from our seminars,” Wells said. “Students are required to pass skills tests on subjects like animation after they’ve completed a few years of preparation in classes at the Signature Academies in Washoe County.”

Wells said that the series of professional development seminars and workshops benefit the teachers, the students and TMCC.

“We have every reason to improve and enhance Nevada’s education system – we’re going to continue these trainings because it benefits everybody,” Wells said. “I presented the model because it is a good one. It’s good for Nevada. It’s also a connection for signature programs to TMCC and we have created and nurtured some great partnerships now.”

Along with the outreach, they have worked out articulation agreements with many of the high schools in Reno and beyond that allow for a smooth transition for students into a college-level graphics program. That pipeline prepares students for college work and takes away some of the guesswork about what options or programs are available to them.

“The seminars and workshops are a resource for the academy teachers; they need them and appreciate them,” Wells said. “The district can’t pay for someone from Adobe to travel here to teach animation, video, CAD or other specialized courses for teacher professional development.”

He said that Dana Ryan, Director of CTE/Signature Academies, and the high school teachers are giving their all.

“Without Dana, none of this would have happened,” Wells said. “She is not afraid to fix things in educational programs and find solutions. She’s a powerhouse. The teachers are engaged, active – top-notch. They work hard and they care.”

There are three skill areas Wells thinks students need to get a job and keep a job:

“Active learning is all about being the best you can be, to seek the information you need,” he said. “Information applied leads to knowledge, and knowledge applied becomes wisdom.”

Versatile skill sets prepare workers to survive in times of economic prosperity as well as the downturns.

“Understanding how color is used for printing and how it differs from the way color is produced in video or on the Web is an example of being versatile and is needed because of industry trends now,” he said. “During corporate downsizing, employees that have a wider range of skills will better survive when they have to take on tasks previously done by others.”

The most expansive range of abilities won’t help the worker, though, if they aren’t good members of teams.

“You have to work well with others, rather than just be talented,” Wells said. “When workforces are cut, bosses are going to keep people they like to work with. This goes for everybody in all fields.”

Writer’s note: In addition to Wells’ work as a character layout artist for "The Simpsons" TV show, he has also been an Assistant Director and Timing Director at Spumco, the Ren and Stimpy Studio.