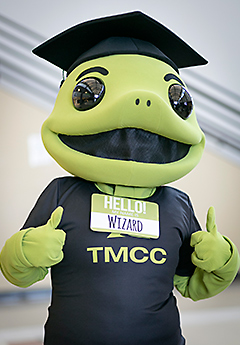 Students at TMCC submitted name suggestions, and then voted in April to call their official mascot Wizard.

Across the years of Truckee Meadows Community College history, students and staff have thought of the lizard as their own special mascot, and now the student body has voted to name their unique symbol “Wizard”.

A brief recap of how TMCC's mascot was visualized

The year before Wizard was named, the TMCC community voted to choose the visual appearance for the mascot logo. This process began in the fall of 2013, when a collaborative effort was led by the Student Government Association (SGA) and the Institutional Advancement Office to organize a project for the symbol’s conceptualization.

TMCC’s students, faculty and staff were invited to submit logo ideas for consideration. Graphic Communications students contributed illustrations, as well. SGA and the President’s Cabinet then selected finalists for the online student advisory vote in March 2014.

The College unveiled its official mascot logo in May 2014, with two versions of a printed logo (with and without a graduation cap and diploma) and full size, six-foot-tall costume design. Student employees were hired to portray the mascot in character.

As the friendly character began to make appearances at school functions, students rushed up to take pictures with their new mascot.

“It increases TMCC spirit to have a mascot with a name students have chosen,” said Nicole Shimabuku, Coordinator of Student Activities and Leadership. “It’s cool to have a mascot. When the mascot walks around campus, people’s faces light up – even the faculty and staff are excited about it.”

SGA began collecting name submissions during the first few weeks of Spring Semester. The TMCC community could either write their idea on a printed ballot or submit the title online. More than 80 names were collected, and SGA narrowed down the field to 20. President’s Cabinet further reduced the range to 10, and SGA finally chose five to place on the spring Student Government election ballot.

The five name finalists and votes received were:

Including the chance to vote for a mascot title may have raised participation in the annual student election. In 2014, there were 110 total students voting, and this year the number rose to 278.

“We did increase our participation in elections for the naming opportunity, and including student opinion on events and whether they supported a tobacco-free campus,” Shimabuku said.

SGA took other steps to increase the amount of students involved in the mascot naming and in choosing leadership positions.

“We had snacks for voters, and the other items on the ballot increased the vote,” Shimabuku said. “Being able to vote online anywhere or here at voting stations, we were hoping to increase awareness.”