Alumnus of the Year Announced 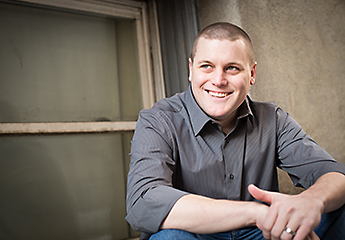 Chris Meredith, 2014-15 Alumnus of the Year, graduated from TMCC in 2006 with an Associate Degree in Graphic Communications, and founded the firm Design on the Edge.

Chris Meredith is honored as the 2014-2015 Alumnus of the Year at Truckee Meadows Community College. This year’s nominees for Alumni of the Year were among the most impressive groups ever nominated for the award, said Lisa Farmer, Alumni Association representative.

Meredith graduated from TMCC in 2006 with an Associate Degree in Graphic Communications, and in 2007 founded Design on the Edge, a small boutique design firm, which was voted as one of the top small family-owned businesses in Nevada by Nevada Magazine, and the “most innovative company and service in Northern Nevada,” by Reno News and Review.

“Chris is the fuel behind every project, and the company’s key developer and creative director,” wrote Courtney Meredith, co-owner of Design on the Edge.

Chris Meredith is an author as well, and in 2013 wrote and published the first pictorial manuscript on the history of the Reno Riverwalk District.

In 2014, Meredith was presented with the Tech Star award by Nevada’s Center for Entrepreneurship and Technology (NCET) and has won more than 30 awards for business and design at the local and regional level. He has more than 12 years of experience working within the design, advertising and marketing industry.

His service to the Reno-Sparks community includes being digital media assistant for the Biggest Little City organization, recently adopted by the City of Reno. He is an active volunteer for a number of nonprofit organizations and volunteers his time assisting with the revitalization of Reno’s downtown corridor.