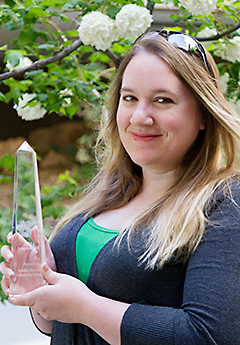 Davis is also the lead photographer and social media coordinator in the Marketing and Communications Department. She has been a graphic designer at the College since 2003.

“We have had positive feedback on the design here at TMCC, so we will use elements from it in an upcoming email campaign,” Davis said. “This will give consistency in message and look with the printed and mailed postcards.”

Her postcard series focusing on College registration and orientation previously won gold at the regional NCMPR Medallion awards in September.

Kate Kirkpatrick, Director of Marketing and Communications, said that staff have asked for repeat mailings of the postcards.

“We’ve had students who commented to us that last year’s postcards were really helpful,” Kirkpatrick said. “Admissions and Records staff have asked if we are planning to send them out again.”

The series of four cards give details about registration steps including:

The design features a diagonal section to the left side with a bold headline over screened duotone (two toned) images of animated students and staff who are engaged in activities at TMCC. To the right, instructive body copy is reversed out of a black background.

“I sometimes get an idea about something, and I know it’s going to work,” she said. “If you have a gut feeling about a design, roll with it.” 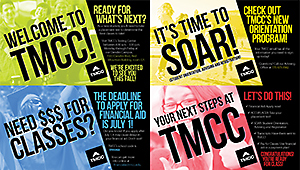 About the NCMPR, and the competition

“The National Council for Marketing & Public Relations is the only organization of its kind that exclusively represents marketing and public relations professionals at community and technical colleges,” according to the NCMPR website.

The organization is based in Albuquerque, New Mexico and represents members from more than 650 colleges in the U.S. and Canada. Board of directors are marketing professionals at community colleges who volunteer time and knowledge to NCMPR.

In addition to the annual award competition, the organization also hosts conferences, professional development courses, networking and a community for marketers to bounce ideas back and forth with colleagues in other parts of the country.

Winners of the 2014 Paragon Awards were announced at the annual national convention on March 22-24 in Portland, Oregon. Categories in the competition included:

In addition to national recognition for Davis, she has received a framed certificate and tall, clear acrylic trophy in the shape of a modernistic obelisk.

More information about Marketing and Communications at TMCC can be found by calling 775-673-7087.