Nominate an Instructor for PTK Award 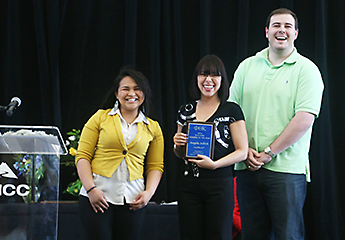 Nominations are being accepted until March 9 for the annual Phi Theta Kappa Teacher of the Year awards at Truckee Meadows Community College.

Current students may vote online. The brief nomination form can be brought up by entering last name and student ID number. Students fill in the instructor’s name, department, full or part time status, if known, and one sentence about why they are recommending the teacher for the award. The instructor must be teaching at TMCC during the current academic year.

Nominating a favorite or impressive teacher is like a big vote of confidence, and starts the award process in motion, Conner said.

The theme for this year is “fellowship,” and Conner said special attention will be paid to answers addressing positive relationships developed with students and fellow staff members.

A rubric has been developed by the committee for scoring each entry based on language usage, coherency of thought, overall impression of the essay, and completeness of the answers. Nomination letters are judged blind, as names will be blocked off by a TMCC staff volunteer before the committee sees applications.

Upon conclusion of scoring, the committee will select one full-time professor and one part-time instructor to receive the award.

Certificates and plaques are presented to awardees

A certificate and plaque will be awarded to both full-time and part-time honorees. Certificates are presented at a ceremony in late April, and plaques are given at the TMCC Employee Awards and Recognition Ceremony on May 12.

Previous winners from most years since 1987 can be viewed on the PTK website.

“We want to appreciate and recognize teachers,” Conner said. “It’s an art form to be a great teacher and also to connect with most of your students.”

For questions or more information about the Teacher of the Year awards, email Conner or visit the PTK website.